Citi Bike is expanding its footprint today, introducing new docking stations north of 85th Street in Manhattan for the first time since the bike share program officially launched in May 2013. As of today, new stations have opened at East 88th Street/Park Avenue, East 88th Street/5th Avenue, West 87th Street/Amsterdam Avenue and West 87th Street/West End Avenue in Manhattan. In total, 28 new docking stations will be added in this stretch of Manhattan in the coming weeks.

This round of expansion will add a total of 140 docking stations, stretching up to 110th Street in Manhattan on the east and west sides of the island, as well as in Brooklyn, with new Citi Bike stations planned for a large swath of Brooklyn between Red Hook and Prospect Park. Here's a map with the current docking stations in blue and the immediately forthcoming docking stations in yellow. 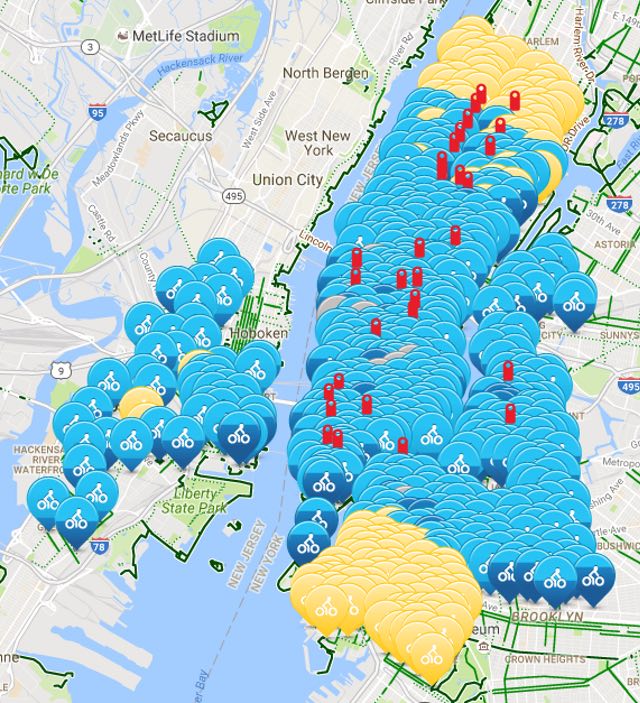 In addition to the new docking stations in previously unserved areas, Citi Bike will be adding 16 new stations to parts of the Upper West Side and Upper East Side that already have Citi Bike, to increase docking station density. As Streetsblog explains, "density is a key factor in the success of bike-share systems since it cuts down on the time users spend walking to and from stations."

"Bringing Citi Bike to all of the Upper East Side and Upper West Side is a great and necessary next step but it captures how much work we still have yet to do," Mayor de Blasio said in a statement. "Citi Bike is a new transit option with the capacity to empower communities and fight inequality, so we are committed to bringing these docking stations further uptown to an even wider and more diverse audience—which I am proud to say is what we will be doing in the months ahead."

To celebrate today's expansion, Citi Bike is offering $25 off Annual Memberships through the end of August, details here. (This discount knocks the annual fee down to $130, from $155.)

Ride safe, and watch out for President Obama's motorcade.

This #Citibike rider tries to penetrate a #NYPD barrier seconds before the #Obama #motorcade rolls across Park Avenue... what happens next will not surprise you #clickbait