Citi Bike has announced that the first phase of its "dramatic expansion plan" will finally start on August 10th, with the installation of new bike stations east of Union Avenue and north of Metropolitan Avenue in Williamsburg and Greenpoint, and east of Nostrand Avenue in Bed-Stuy. August will also mark Citi Bike's first foray into Queens, with stations in Long Island City.

This rollout of 91 new stations is scheduled to precede the significantly smaller and much more contentious (dare we say "inconceivable?") rollout of 48 Citi Bike stations across the UES and UWS this fall.

We first heard whispers of Citi Bike's GREAT BIG EXPANSION last October, when Citi Group and new owners Motivate brought the struggling company back from the brink. (Citi Group promised $70.5 million through 2024, and Motivate pledged $30 million when it took over.) At the time, Citi Bike only had 6,000 bikes across 330 stations in Manhattan and a small swath of North Brooklyn. The current plan is to have 12,000 bikes across 700 stations by 2017. 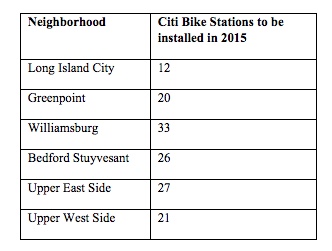 Citi Bike has also vowed to put more than 2,000 new bikes on the road by the end of the summer—bikes that are apparently an upgraded from the originals, but look pretty much the same, except that the seats don't pool with water when it rains.

If you're thrilled/outraged at the prospect of a new Citi Bike station taking up space on the sidewalk outside of your apartment, you can hold your breath and search your exact address here.

#bed stuy
#citi bike
#expansion
#greenpoint
#long island city
#motivate
#williamsburg
Do you know the scoop? Comment below or Send us a Tip