Restaurants owned by the Cirpiani family, including the Rainbow Room, may lose their liquor licenses. Earlier this month, patriarch Arrigo Capriani and his son, Giuseppe Cipriani, who is the CEO of Cipriani U.S.A. Inc., pleaded guilty to tax evasion charges. They agreed to pay a $10 million settlement, but now that they are convicted felons, the State Liquor Authority can strip their company of its liquor licenses.

The Post explains that "state law forbids convicted felons - whether a person or a company - to sell booze," and that the Ciprianis' only hope would either be "a pardon by Gov. Spitzer or special permission by either the sentencing judge or the parole board."

The SLA is probing Giuseppe and Arrigo, as well as their corporate entities, said SLA spokesman Bill Crowley.

One question is whether the tax-fraud admitted by Giuseppe, whose name is on the Cipriani liquor licenses, constituted "improper conduct" for a licensee, he said.

Another question is whether Arrigo, whose name does not appear on the licenses, was involved in running the businesses or had a financial stake in them. If so, the Ciprianis should have disclosed that and added his name to the license, Crowley said.

If found in violation, the father and son could be fined or barred from holding licenses.

There's also a question about whether Arrigo Cipriani pleaded to a felony charge (son Giuseppe pleaded to a misdemeanor) in order to shield Giuseppe and the business. 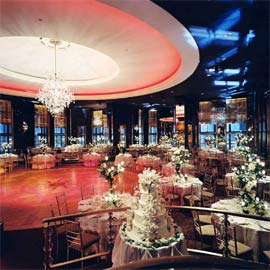 Besides the Rainbow Room, the Cipriani own and operate Cipriani Dolci, a huge restaurant and popular event space at Grand Central and Cirpiani Downtown, a Soho hangout. They have also catered events at the Toy Building in the Flatiron, but the building's owners have been trying to evict them, claiming that the Ciprianis "repeatedly [use] the lobby as party space without their permission." The article also mentions other instances of lawsuits from former temporary wait staff and not being pleasant to vendors.

The Ciprianis' lawyer says the Ciprianis should keep their licenses, "They run a wonderful business and employ 900 to 1,000 people. They're good people to have in our country and city." We wonder, should the SLA does strip their liquor licenses, if ownership of the company will actually shift to other family members, instead of selling it to an outside party.