Dr. Christine Blasey Ford feared that coming forward with sexual assault allegations against Brett Kavanaugh would mean "jumping in front of a train that was headed to where it was headed" regardless of who stood on the tracks, and that she would be "personally annihilated" in the process. After the Senate confirmed Kavanaugh on Saturday, many survivors felt that train annihilated them, too.

Ahead of the vote, some speculated that the Kavanaugh hearing would test the #MeToo movement's strength; on the other side, it's tempting to see the entire proceeding as a failure. Listening to Sen. Susan Collins praise a man credibly accused of serial sexual predation at the same time she pledged to do better by survivors of sexual violence; watching Republicans tout an FBI investigation they designed to be toothless; hearing the president openly mock a survivor, it seems clear that the people charged with protecting each and every one of their constituents failed. And as we approach #MeToo's one year anniversary, it's hard to fight the fear that the movement might fail, too: We stand near the same place we started, having not yet seen much-hyped reckoning forecasted last October.

"I know it feels like we've been hit by a Mack truck: we kind of have. But we've survived worse," Tarana Burke, a longtime social justice activist and #MeToo's originator, told Gothamist. Still, she noted, "I think you build to a reckoning."

Sitting in a dressing room at the 92nd Street Y in Manhattan Sunday night, Burke was there to take stock of the #MeToo movement's progress with political commentator Karine Jean-Pierre, part of a progressive speaker series from 92 Y's XYZ free membership program. This time last year, Burke explained, the force of over 12 million people sharing their experiences of sexual violence, often for the first time, felt powerful. The fact of men finally being called out for their long-sustained abuse felt almost like accountability, and made that power more meaningful. Then came the now what; the backlash; the weaponizing of a hashtag by prominent men who (wrongly) viewed the imperative to believe survivors as an imperative to assume male guilt.

The past two weeks have seen us stall in that space, but as Burke emphasized, no movement accomplishes its aims within 12 months, and all of them suffer challenges alongside the triumphs. Despite the obvious blow Kavanaugh's victory dealt, the response from those who stand with Dr. Ford strikes Burke as the first rumblings of a real reckoning. Throughout the confirmation process, she said, "We've seen the power of survivors collectively coming together around an issue that affects our lives and affects other people's lives and the lives of people we love. Even though it feels, for some people, like a loss, the win is in the galvanizing."

When Kavanaugh officially accepted his post, he did so with swarms of impassioned protesters shouting on his doorstep, their chants—"Hey hey, ho ho, Kavanaugh has got to go"—almost certainly audible inside the Supreme Court. Protests were not confined to the capitol (where 300 participants were arrested last week), and they continued even after his swearing-in concluded. Demonstrators flooded the streets in New York City on Saturday; they rallied in San Diego, in Cleveland, in Pittsburgh, in cities across the country. 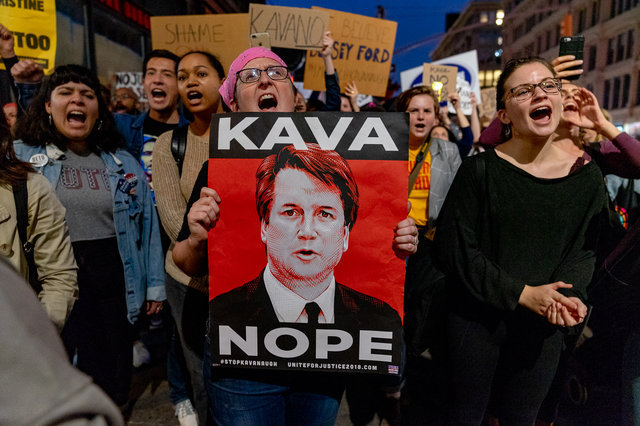 When it first went viral, Burke recalled, #MeToo called attention to the overwhelmingly widespread nature of sexual violence. "But we still didn't see a focus on everyday people," she added: The stories that made national news consistently involved high-profile men at the top of their industries. "Now we can." And that, to Burke's mind, is the small sliver of good to be extracted from a dismal situation.

Burke's appearance drew a crowd on Sunday night, a turnout she sees as a marker of progress in and of itself: 10 years ago, when she originated the Me Too concept, a talk about sexual violence could never have filled a roomful of seats. Back then, the news cycle did not feature appearance after appearance by experts analyzing the nature of stored trauma, memory, and the effects of abuse.

"The whole idea of believing survivors," she explained, "takes into account the fact that people, by and large women, for many years felt like they couldn't ... come forward because they would not be believed." We've just begun staking out a public space for survivors to tell their stories, she continued, but until we can talk about accountability, we won't have a reckoning. And even as it drew a #MeToo community together, the Kavanaugh confirmation process harshly reminded anyone who watched just how far away that conversation remains.

If Kavanaugh sat before the Senate Judiciary Committee and admitted something to the effect of, "My understanding of sexual violence has changed from 17 to now," Burke told the audience; if he acknowledged that he had a teenage drinking problem, and that he understands now where his past behavior crossed clear lines; if he had, in short, taken responsibility for his actions, apologized, then his confirmation may have been easier to stomach.

Instead, he threw out an unequivocal, enraged denial. Senators accepted it: Lindsey Graham exploded in an equally affronted, apoplectic outburst at his peer's treatment, while Sen. Collins, who positions herself as a proponent of women's rights, highlighted a "silver lining" in an unpalatable outcome she helped precipitate. Collins hopes that the whole experience—Dr. Ford's time on the train tracks and her (alleged) assailant's subsequent win—will encourage survivors to "press charges" in the aftermath of an assault. Collins seems to have forgotten the barrage of judgment and criticism and death threats—the possibility of which have always kept survivors silent—that have followed Dr. Ford since she made her own report.

"Republican Senators' response, that lets us know that we are not even ready for a conversation about accountability," Burke said. "The hearing was a chance to make amends for Anita Hill, but if you don't feel like you did anything wrong, then you don't feel like there's anything to make amends for." #MeToo's job now, she explained, is to keep having that conversation out in the open: To keep working on the most resistant minds and poking holes in the myths they hold about sexual violence and power. 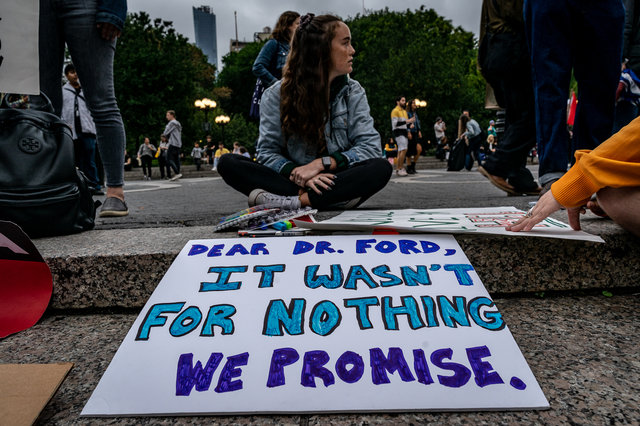 "For as many trolls and naysayers and doubters and disbelievers as there are, that simple act of [Dr. Ford] standing up and being as credible as she was, standing there and telling her truth, has definitely shifted folks' hearts and minds," Burke stressed. "It was absolutely not for nothing."

"What we know: The power of #MeToo is in the numbers. It's in the people," she added. "[Dr. Ford] didn't get hit by that train alone. We're out here together."

#brett kavanaugh
#christine blasey ford
#me too
#tarana burke
#original
Do you know the scoop? Comment below or Send us a Tip