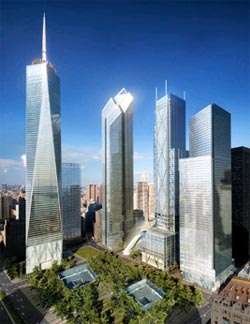 The Port Authority says that a Beijing-based real estate developer will lease around 200,000 square feet at Freedom Tower (building on the far left). The news is notable because the only two other tenants are government agencies - the U.S. General Services Administration and the state office of General Services.

Vantone Real Estate Company is planning on taking the 64th to 69th floors to build the China Center, described as a $90 million "combination chamber of commerce and cultural center," for Chinese business hoping to branch out in the U.S. and for American companies with interest in business in China.

The Port Authority signaled its interest in landing more foreign tenants (read: the dollar is cheap!), as its chairman Anthony Coscia said, "Serious interest from the China Center is a major milestone in our efforts to secure Freedom Tower tenants from around the world."

Vantone signed a letter of intent for a 22-year-lease which starts out at $80/square foot (the Port Authority needs to approve the deal). However some wonder if the company can commit, as Vantone has walked away from deals before. (Heck, Vantone even flirted with renting at 7 World Trade Center.)