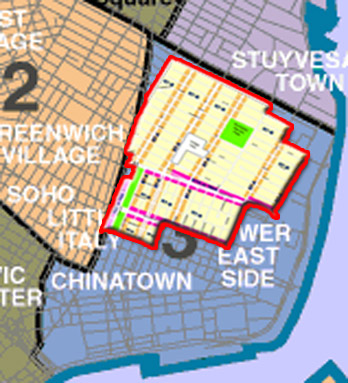 Dozens of protesters stood inside and out of a Community Board 3 meeting yesterday, claiming that a proposed rezoning plan was racist and could result in the displacement of minority community members. At issue is a rezoning plan that places height restrictions on new buildings going up on the Lower East Side and the East Village. Community board officials claim that the restrictions are necessary for the area to retain its innate character.

Critics claim that the rezoning specifically outlines the already-gentrified areas of the LES and East Village, while excluding the less affluent and more ethnically diverse areas like Chinatown. Zoning off the proposed area will supposedly push the development of high-rises and displace residents into the excluded communities.

CB3 Chairman David McWater said that since Chinatown extends beyond the borders of his community board's jurisdiction, it's really out of his hands as to how to protect that neighborhood. Plus, since the environmental review procedure for the rezoning is already underway, it's unlikely that any changes could be made to the boundaries at this time.