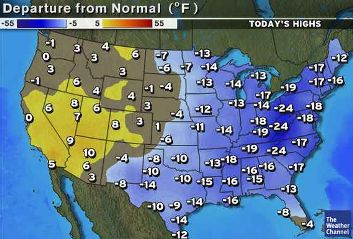 The pre-winter chill continues to deepen as Canada belches more Arctic air our way. The city won't reach 40 degrees for the third straight day today. That won't be be a big deal come January, but it is quite chilly for this time of year. Did you see the snowflakes yesterday morning? Admittedly there were only like three of them. There is another slight chance of flurries this afternoon.

This first cold outbreak of the season will reach its nadir tomorrow with an expected low of 24 and high of 35. It should be sunny but that 35 degrees will be accompanied by the horse it rode in on, namely a brisk west wind. According to this calculator that puts the early morning wind chill in the teens and mid-afternoon wind chill in the 20s. Put another way, any exposed skin will be losing heat at a rate greater than a thousand Watts per square meter. Bundle up out there!

The deep trough of low pressure that's allowing the cold air to reach us is expected to shift eastward by Sunday. Temperatures will rebound to near 40 on Sunday and to the mid 40s on Monday and the rest of the week.

#cold
#weather
#wind chill
Do you know the scoop? Comment below or Send us a Tip