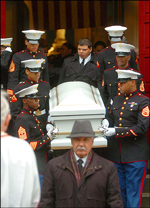 More than a year and a half after the death of Nixzmary Brown, the Administration for Children's Services has hired 20 retired NYPD detectives to work as trained investigators consulting with ACS caseworkers. The ACS plans on eventually fielding 120 such investigators.

The need for a bolder approach to protecting children being monitored by the ACS follows the beating death of Brown in January 2006 and a number of other deaths of children under ACS supervision. The controversy over Brown's death led to a shake up at the agency and the suspension of some caseworkers.

Traditionally, relations between ACS and the police have been contentious. According to the Daily News, confidentiality laws have prevented caseworkers from sharing a family's history with police, and cops are rarely (if ever) called should a caseworker find something suspicious about a child's family situation. Now, the investigative consultants will train caseworkers to probe deeper when checking up on children's welfare and for the time being will assist them by doing legwork in locating individuals.

With the hiring of additional consultants, they may eventually accompany caseworkers into the field. Matt Fraher, an investigative consultant in northern Queens, described what he hoped to accomplish [pdf] working for ACS.

“I was trained by the NYPD and the State Police in their child abuse and sex crimes seminars, where I learned specific interview and interrogation techniques. With that training, and 20 years on the streets, I know what to look for in body language, how to tell when a person’s lying, or if they’re hiding something. I see my role here as a teacher. I’m trying to communicate and share the information and experience it took me 20 years to build.”

Investigative consultants will earn $51,000 a year, which is more than the $38,000 starting salary for a caseworker.

#abuse
#ACS
#Administration for Children's Services
#child abuse
#children
#daily news
#death
#history
#interview
#laws
#news
#News: NYC
#nixzmary brown
#nypd
#police
#queens
#salary
#state police
#The ACS
#The Police
Do you know the scoop? Comment below or Send us a Tip
A new Gothamist is coming! We’ve moved comments over to our beta site. Click here to join the conversation and get a preview of our new website.