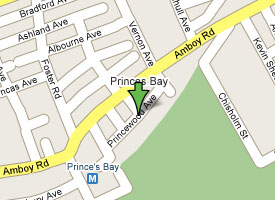 A fire late last night in the Staten Island neighborhood of Prince's Bay claimed the life of a nine-year-old boy. Thomas Monahan Jr., who was unable to escape the fire at 49 Princewood Ave. was pronounced dead at 1:45 a.m. at Staten Island University Hospital. The boy's father Thomas Monahan desperately attempted to save his son after he, his wife and his 8-year-old daughter escaped safely.

Monahan reportedly tried to save Thomas Jr. by climbing a ladder to the second floor of the residence and breaking a bedroom window with a chair, but was unable to get into the house. The FDNY says the fire started in the basement or on the first floor of the house and then spread to the second floor via the stairway. Three firefighters and three other people had minor injuries and the ause of the blaze, which was put out in 45 minutes, is still under investigation.

With the cold weather, we hope that the cause of the fire wasn't from a space heater or some other way the family was trying to stay warm, a common cause of fires during the cold weather. Renters should keep the city law's regarding heat in the winter.