Rahm Emanuel is here to remind New Yorkers that our subways are bad and we should feel bad. Writing for the NY Times op-ed section Monday, the Chicago Mayor spent about a thousand words criticizing the MTA and bragging about his city's faultless transit system, under the troll-y headline, "In Chicago, the Trains Actually Run on Time." Congrats, Rahm! So happy for you guys!

The piece begins with Emanuel summarizing the New York City subway's current state of emergency to Times readers, before adding that Washington D.C.'s transit authority isn't doing too hot either. "Meanwhile, in Chicago," Rahm segues, "a recent survey found that 85 percent of passengers are satisfied with service on our transit system, the nation's second most used."

"How have we done it?" he asks, in a Ted Talk-y sort of way that suggests he really wanted the invite to Cuomo's Genius Conference. "First, we put reliability ahead of expansion. We focused relentlessly on modernizing tracks, signals, switches, stations and cars before extending lines to new destinations." 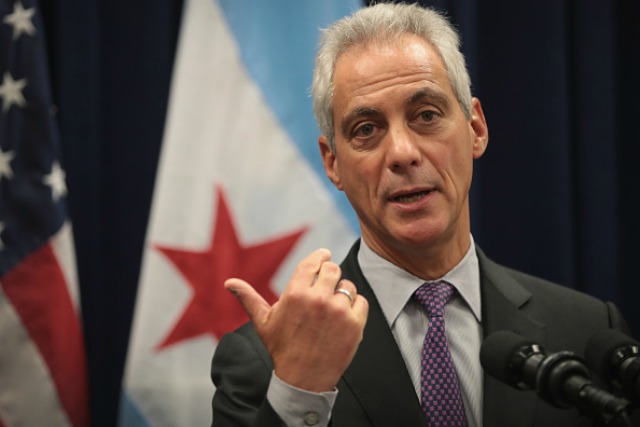 So, yes, this is actually perfectly good advice. And the piece does make plenty of other strong, if obvious, points, like how giving the state control of a city's transit system can lead to all sorts of problems, and how federal aid is necessary. But if we're about to get a whole tour of politicians scoring points by kicking our ailing subway while its down, then it only seems fair that we be honest about these comparisons.

For example, when Emanuel mentions that Chicago's transit system is the "the nation's second most used," he neglects to mention that this is a loooong second. The CTA's annual ridership sit at about 238 million (2016; PDF), compared to New York's 1.757 billion yearly riders (2016). We have 472 stations, compared to their 145. Our system operates 24 hours per day, while parts of theirs stop running entirely once it gets late.

Later in the piece, Emanuel writes, "Unlike New York, which has spent billions to reach Hudson Yards, or Washington, which has concentrated on trying to reach Dulles Airport (both laudable projects), Chicago has improved the existing system." This is not really true, either. As our friends at Chicagoist pointed out last week, he has long been obsessed with building a high-speed rail line to O'Hare from the Loop, something that his office recently discussed with Elon Musk—not exactly a champion of incremental, sensible public transit improvements.

It's not just Rahm who is into the O'Hare Express Train. Former mayor Richard Daley was definitely obsessed with it too—he was behind the "Station to Nowhere," a $400 million mass transit "superstation", sitting below Block 37 that no one can access, not even as a luxury shopping mall.

So, maybe this is just the F Train Stockholm-Syndrome talking, but Emanuel's mostly level-headed criticism of the MTA strikes a defensive nerve, especially when his premise ignores the many problems within his own transit system.

Can someone please explain what's wrong with the blue line every minute of the day? I'm dying a slow death waiting w 600 people. @CTAFails

Just hanging with a few hundred of my closest neighbors, due to @cta signal issues. #samestorydifferentday @CTAFails pic.twitter.com/TjzlT7OImM

Or, as the shade-throwing MTA Chairman Joe Lhota put it in a statement to Gothamist: "The Mayor of Chicago would seem to have enough of his own problems to focus on without trying to save face by capitalizing on someone else's crisis."

#chicago
#joe lhota
#MTA
#rahm emanuel
#subway
Do you know the scoop? Comment below or Send us a Tip
A new Gothamist is coming! We’ve moved comments over to our beta site. Click here to join the conversation and get a preview of our new website.