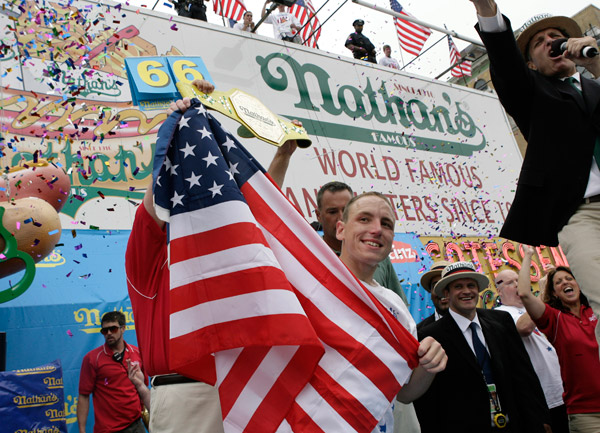 The hot dogs were barely digested when Takeru Kobayashi threw down the proverbial gauntlet for next year's Nathan’s Famous Hot Dog Eating Contest. After being handed defeat by Joey Chestnut in this year's contest, Kobayashi looked at Chestnut, pointed and yelled, "I will definitely beat him next year." Chestnut broke his own world record and Kobayashi's Coney Island record yesterday by eating 66 HDB (hot dogs and buns) and brought the Mustard Belt back to the United States. Kobayashi finished with 63 HDB and wasn't disqualified despite what looked like a reversal of fortune. George Shea said, "If it were to come out of his mouth or out of his nose and fall on the table, it would have been considered a reversal of fortune." Ah ha! Liquid which clearly squirted out of Kobayashi's mouth and then through his hands does not count. The contest was so close that judges had to count the scraps left on the plates of Kobayashi and Chestnut for the final count.

Before yesterday's event, it was unclear if Kobayashi would compete, and if he did, what shape he would be in. In the weeks leading up to the event, it was revealed that Kobayashi's jaw was sore from training and he had a tooth removed to alleviate the pain. Kobayashi's jaw seemed fine while eating yesterday, when the biggest challenge that the former 6-time champion faced was the 23 year-old Chestnut.

With his performance yesterday and with his previous world record of 59 1/2 HDB in June, Chestnut has clearly shown that he's now the eater to beat. Prediction for next year: another record is set with at least one eater eclipsing the 70 HDB mark. A crazy feat considering the world record before this year was 53 3/4.