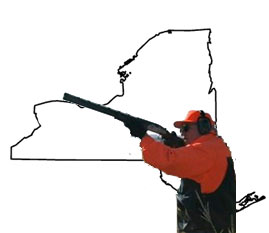 Vice President Dick Cheney had a day of hunting at the Clove Valley Rod & Gun Club in upstate New York - and no one was hurt. However, there is a storm brewing over the fact that a Confederate flag was hanging in a garage on the property.

While everyone was joking that Cheney might accidentally shoot a hunting companion, the way he did in February 2006, in the face, his trip was pretty uneventful. He flew in on Sunday night, staying at the Courtyard by Marriott in Poughkeepsie (government discount, we bet!). He spent eight hours at the club and left NY State around 3:45PM. Who knew that second-in-commands got Mondays off?

But then a Daily New photographer took a picture of a Confederate flag hanging at the club. When informed of this, the Reverend Al Sharpton said, "I call on Vice President Cheney to leave immediately, denounce the club, and apologize for going to a club that represents lynching, hate and murder to black people." The VP's spokesperson said that Cheney and his staff did not see the flag.

The News says that the photographer, Howard Simmons, was threatened with arrest when he asked the club for comment. Simmons himself explained to the Poughkeepsie Journal, "The garage was open, and hanging on the rear of the door was the Confederate flag." He did say the garage door could have been closed when Cheney was there.