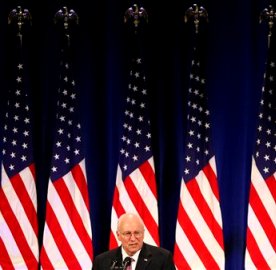 Vice President Dick Cheney told Republicans gathered at the midtown Sheraton NewYork Hotel and Towers last night, "If we all put our shoulders to the wheel between now and November, I'm confident we'll see John McCain as the next president of the United States.''

Cheney was in town for the NY State Repubican Party fundraiser (700 people at $1,000/plate!), and he took the opportunity not to mention former press secretary Scott McClellan's book but to bolster Senator John McCain's campaign and tout the Bush administration's success with the war on terror, "Now that we've gone more than six and a half years without another 9/11 is no accident."

Also at the dinner was Rudy Giuliani who, per Fox Embeds, "jokingly noted that this was the most Republicans he had seen in Manhattan in a long time." He also said, "As far as I am concerned if Barack and Hillary can keep fighting until November I mean what do we care, right?"