As you may have noticed, Brookhaven National Laboratory and the City of New York are currently cooperating on the largest urban airflow study in U.S. history—and you get to be the guinea pig! Yesterday they released "low concentrations of harmless gases" known as perfluorocarbons into the subway system and at street level, as part of a $3.4 million that the Government says will track air flow to help authorities manage the aftermath of a chemical terrorist attack. Two more days of testing are scheduled.

This is all being done for our safety, we're told, but it doesn't take a tinfoil trilby to feel skeptical whenever the Government promises us something is harmless. After all, it wasn't so long ago that the Atomic Energy Commission—which owned Brookhaven at the time—injected radioactive iodine into healthy newborns and pregnant women, just to see what happens. Four years earlier, in 1949, the AEC secretly released radioactive materials into the atmosphere over three small towns near a plutonium production facility in Washington State, and monitored the results.

So are these perfluorocarbons [PFCs] as harmless as we're told? Brookhaven says yes: in the concentrations they're being emitted, they are totally harmless. But yesterday a handful of these fliers, pictured here, were found on the Q train—although it's obviously a parody, the information on the back is not without merit (scroll down). A 2011 study published in the Journal of Clinical Endocrinology & Metabolism did in fact find that women exposed to perfluorocarbons had decreased levels of the female sex hormone estradiol, and, in some cases, early menopause.

On the other hand, PFCs and the related compound Perfluorooctanoic acid [PFOA] are everywhere at this point; their widespread use has disseminated them into the soil, water, air, etc. More than 98 percent of Americans have PFOA in their bodies, according to a survey conducted by the Centers for Disease Control and Prevention. PFCs are also powerful greenhouse gases.

Microwave popcorn linings and Teflon-coated frying pans, for instance, contain PFCs—the EPA insists it's safe, but everyone used to think asbestos was safe too. Some researchers are concerned about the effects of PFCs when they break down, and a 2010 study in the journal Environmental Health Perspectives found that people with higher levels of PFOA in their blood were more likely to suffer from thyroid disease.

So who knows. Maybe we'll all be fine and the Government has our best interests at heart! Or maybe this is all part of some Children of Men conspiracy to send the fine young women of New York City into menopause to stop them from reproducing more liberal Democrats! Only time will tell. There are two more days of totally harmless testing planned this month; the Government hasn't yet told us when. 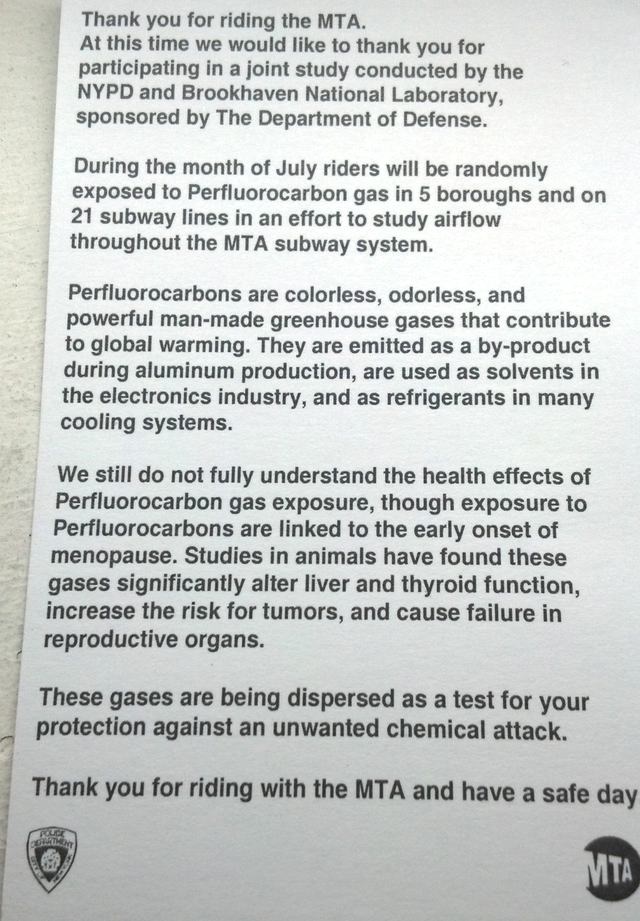 The reverse side of a fake NYPD flier distributed in the subway yesterday. (Gothamist)

#gas
#pfcs
#original
Do you know the scoop? Comment below or Send us a Tip