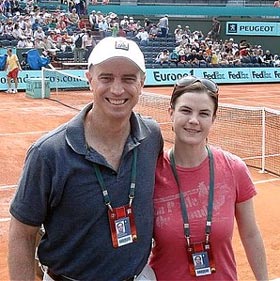 Police sources say that the woman found dead in her West 22nd Street apartment was killed by her boyfriend after she broke up with him.

The Post reports that 26-year-old Margaux Powers (pictured, with her father) had "canceled plans to attend a family gathering Thursday" so she could break up with Jonathan Smith, 34. Powers and Smith, a chef who had been recently laid off, lived together in the Chelsea apartment. Police believe Smith slit her throat with a kitchen knife, which was later cleaned and heated in an oven, perhaps in an attempt to destroy evidence.

It's believed Powers was killed on Thursday; when her family did not hear from her, her sister Dana checked the apartment on Friday night with the building's super and didn't find anything out of place, but never entered the bathroom. The sister returned on Saturday night and found Margaux's body in the bathtub;a neighbor said she heard Dana Powers screaming, "Oh, my God, he did it, he finally did it!" and calling Smith a "raging alcoholic!"

According to the Daily News, an note "scrawled by Smith" was found on the dining room table and it was "full of remorse for the 'wrongdoings' he had done to Powers and her family." Police searched for Smith, who had somehow entered 55 Exchange Place in the Financial District (the News says an ex of Smith's once lived there) and jumped off the building, "his body splitting in two when it hit a flagpole while hurtling toward the pavement below."

The Powers family, of Glen Cove, Long Island, and the Smith family, of Glen Head, knew each other; Smith's stepmother declined to speak to Newsday, "I think both families need time to just heal and be together." Powers' father Michael released a statement noting how his daughter, a 2005 Cornell graduate, had "recently moved to Manhattan" to work in finance, "We are completely devastated by the loss of Margaux...Margaux was a sweet, caring young woman and a friend to all who were lucky enough to know her."