More than 100 students at a Chelsea public high school staged a brief sit-in outside of their principal's office on Thursday morning, following an assembly on dress code for the sophomore class, during which students say Principal Darlene Miller shamed female students.

Students at the NYC Museum School on West 17th Street gathered in the hallway around 11:30 a.m. on Thursday, according to social media posts and a Museum School senior who spoke on the condition of anonymity, fearful of repercussions from school administrators. Earlier that morning, he said, a group of sophomore girls posted signs around the school criticizing comments Principal Miller had made on Wednesday.

"At Wednesday's assembly, the Principal began making comments about 'suggestive' clothing and indirectly speaking of certain students and what they were wearing," said the senior, who was not present at the sophomore class assembly. "She even went as far as to say that the clothing one wears dictates their intent, obviously a very offensive statement," he alleged, adding that Miller warned students that if they "dressed inappropriately, she would give them an oversized shirt to make them 'look like a sack of potatoes.'"

A secretary at the Museum School referred us to Vice Principal Joel Lowy, who did not immediately respond to an email or voicemail requesting comment.

"We are dedicated to providing students with a safe, supportive and inclusive learning environment," Toya Holness, a spokesperson for the Department of Education, told Gothamist. "The school is reviewing its dress code policy and staff members are working with students and families to address any concerns."

Students decided to gather Thursday when school staff allegedly began removing the posters and disciplined students, according to the senior.

"The students who organized the posting of the flyers were called into the office to be spoken to and had their parents called, with one student being sent home," he told Gothamist in an e-mail.

"When you interrupt a girl's school day to force her to change clothes, or send her home because her shorts are too short or her bra straps are visible, you are telling her that making sure boys have a 'distraction free' learning environment is more important than her education," one sign at the sit-in read.

"It doesn't matter what she was wearing," read another. A female student was photographed wearing a T-shirt with the message "don't slut shame me" and "it's 2017 NOT 1920s."

Social media from the scene shows students chanting "What I wear is not my intent!" and holding hand-written signs reading "NYC Museum School: Your support of rape culture Is showing. Better put on a big shirt."

Photos of the action also show female students wearing t-shirts with "sexism is deeply rooted in our school's dress code" written in Sharpie. 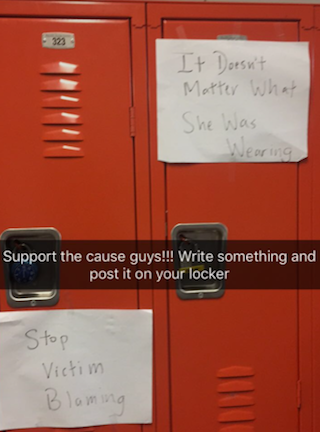 The protest lasted about an hour, according to the Museum School senior. "The principal finally got across that she'd be willing to speak to a group of ten students, versus the 200 in the hallway," he said. "It was a really great experience. I think it did a lot of good work."

He added that the school's dress code "is very anti-women in my opinion."

According to the Bill of Student Rights and Responsibilities section of the DOE's Citywide Behavioral Expectations, students are permitted to determine their own dress, so long as their attire is not offensive, dangerous, or interferes with the learning and teaching process. Individual schools can determine what type of clothing violates those guidelines.

The Museum School dress code is posted on the school website.

"You should use common sense and good judgment by avoiding offensive or distracting types of clothing," it states. "Please know that in an effort not to disrupt the educational process, we will provide you with a Museum School t-shirt to wear if you come to school dressed in an inappropriate manner."

In addition to hats, students are prohibited from wearing "shear or transparent" clothing; tank tops, tube tops or halter tops; and shirts that "expose bras/underwear or anatomy from the front/back or side," among other items.

The NYC Museum School made the NY Post's list of 40 top public high schools in 2016.

#dress code
#NYC Museum School
#sit-in
#original
Do you know the scoop? Comment below or Send us a Tip
A new Gothamist is coming! We’ve moved comments over to our beta site. Click here to join the conversation and get a preview of our new website.