Employees at the Goodwill store in Chelsea ejected a Honduran woman and her friend for speaking Spanish, according to a complaint the woman filed with the city's Human Rights Commission on Tuesday.

"This behavior is entirely inexcusable," said Christine Clarke, director of the Civil Rights Justice Initiative at Legal Services NYC, in a statement. "To throw people out of a store for speaking Spanish, particularly in this time of heightened tension and fear for immigrant communities, is just reprehensible."

Bruna Miguel, 33, was shopping at the West 25th Street thrift store in November 2016 and asked an employee to show her a wallet she was considering purchasing, the complaint says. As she looked at the wallet, Miguel turned to her friend and started speaking in Spanish. At this, the employee allegedly interjected, "Speak English. This is America."

In response, the employee allegedly repeated variations of "You can't speak Spanish in here. This is America." 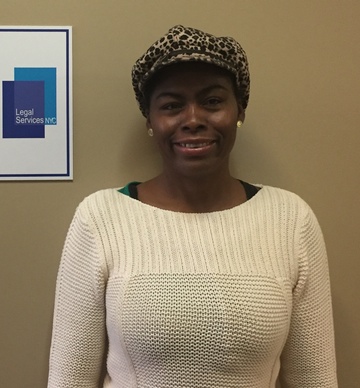 Bruna Miguel, a Bronx resident from Honduras who says Goodwill employees discriminated against her for speaking Spanish. (Legal Services NYC)

The two went back and forth like this for a while before the employee called a supervisor. When the manager arrived, Miguel tried to explain herself, but according to the filing had difficulty because she is not fluent in English. The supervisor allegedly ignored her attempts to communicate and told her she had to leave the store, then became angry when she asked why.

The manager then purportedly summoned a security guard to force her to leave, and as the guard approached, Miguel and her friend headed for the exits, the eyes of the store's other customers on them.

Legal Services alleges that the store's treatment of Miguel constitutes illegal discrimination on the basis of national origin and demands that Goodwill retrain its employees and create policies to end discrimination at its stores. The complaint also seeks damages for Miguel's emotional distress. She now has an aversion to all Goodwill stores, according to the filing.

"I was so hurt and embarrassed when the manager told me I had to leave the store, because I wasn’t doing anything wrong," Miguel said in a statement. "I was just having a conversation with my friend. I never thought a store like Goodwill would treat someone badly just because they were from another country or didn’t speak much English, especially in a city as diverse as New York."

A manager, who asked that his name not be used, said he would have been working on that day in November, a Wednesday, and he did not recall any such incident. Also, he claimed that no one matching Miguel's description of the employee—a blonde white woman—worked at the store then, and he said that the diversity of the store's staff makes Miguel's account "virtually impossible."

"That would be virtually impossible as half of my staff are Spanish," he said, adding that his assistant and another manager are Spanish speakers. "I don't know where that is coming from."

He continued, "That would nullify the whole case, if that so be the case, if it was discriminatory. Because then I wouldn't have no Spanish-speaking people or any Spanish descent people in the building."

The manager said that discrimination goes against Goodwill's mission, and that policies against racial, gender, religious, ability, and other forms of discrimination are covered in worker training.

"I'll happily investigate it," he said, adding that even the thought of something like this happening in the store he runs is "absolutely reprehensible."

Goodwill New York and New Jersey spokesman Jose Medellin said in a statement, "We are not going to comment on an ongoing legal matter. We are investigating the allegations in the complaint, which do not reflect Goodwill’s values. Goodwill NYNJ is a nonprofit that focuses on employment for people with barriers and disabilities. Our organization values the dignity of work, and prides itself on the diversity of our staff and the individuals we provide services to."

Human Rights Commission spokesman Seth Hoy said the agency "will investigate these alleged acts of discrimination and will hold violators accountable and ensure that victims get the justice they deserve."

Spanish is the second most commonly spoken language in New York City. Of the 7.8 million people in the city over 5 years old, 4 million speak only English at home, whereas 1.9 million primarily speak Spanish at home, according to census data. The United States does not have an official language.