A dentist with a practice in Chelsea has been arrested for allegedly giving dental work to a drug dealer in exchange for meth, as well as possessing child pornography, and attempting to spread H.I.V.

Dr. John Wolf, 59, was arrested this morning after a two month joint probe by the FBI and Drug Enforcement Administration. According to the complaint, Wolf "provided dental services to a drug dealer in exchange for methamphetamine, some of which the defendant would use personally and some of which he would distribute to others."

Wolf, who resides in Greenwich Village, is also accused of using his dental office as a place to view and distribute child pornography; in recorded conversations with an undercover FBI agent, Wolf allegedly admitted to possessing child pornography and "provided the undercover agent with a flash drive containing files depicting child pornography, including videos of children as young as toddlers being raped by adult men."

The complaint alleges: "Wolf stated that he gets particularly 'excited' by specific child pornography videos and described a video depicting an 8-year-old 'retarded' girl engaged in sex."

On top of all that, the complaint states that Wolf told an informant he had punctured holes in condoms "in an intentional attempt to spread the H.I.V. to his sexual partners."

The Times reports even more horrifying details: authorities started investigating Wolf after arresting the drug dealer carrying 1,844 grams of methamphetamine at JFK in March 2015. Among other things, the dealer told officials that Wolf showed him videos “of infants and toddlers being sexually abused by adults,” and that Wolf told him that "he was actively involved in underground sex parties at various locations in New York City, including in Brooklyn, where participants would engage in sexual intercourse with animals."

"I never suspected this," a worker at Wolf's 15th Street office, who has been there for a year and a half, told the NY Post. "He’s an amazing guy, a very giving person. He helped a lot of people in the community."

A notice has been placed on his Yelp page about his arrest as well. 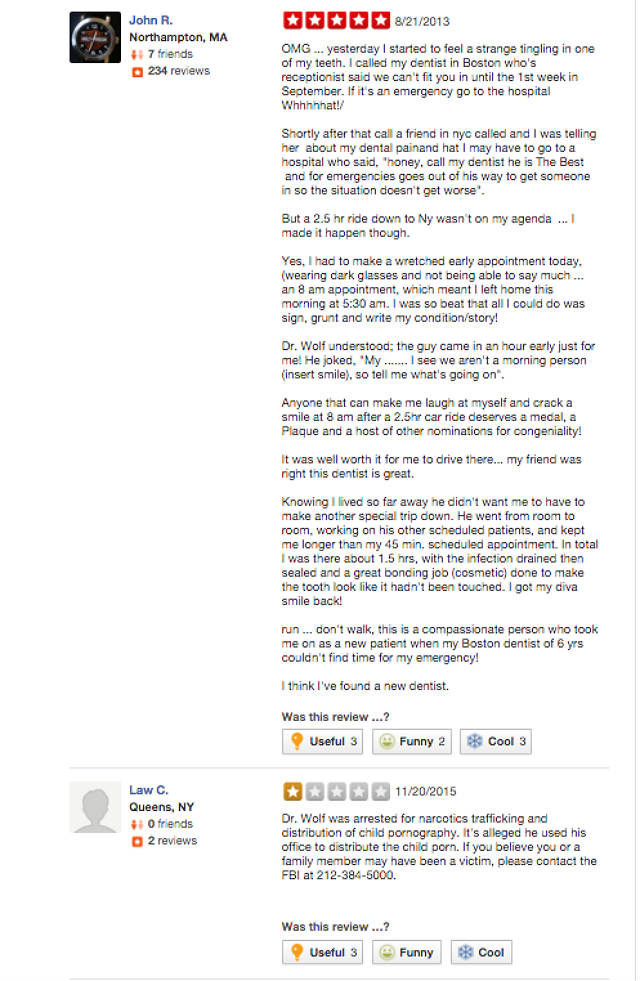