Ahmad Khan Rahami, the Elizabeth, New Jersey man accused of setting off a series of explosive devices in New York and New Jersey last month, pleaded not guilty from his hospital bed on Thursday to NJ state charges that he attempted to murder five police officers in the lead-up to his capture.

Rahami was shot several times on the afternoon of September 19th, after police discovered him sleeping in the entrance of a bar in the town of Linden. The 28-year-old had been identified as a person-of-interest earlier that morning, and his name had been pinged to cellphones across the region. Police had already raided his family home when they discovered him.

When officers confronted Rahami he allegedly fired shots, hitting one officer in the stomach (the cop was wearing a bulletproof vest and survived). He then ran away before being shot and wounded. None of the five officers involved in the arrest sustained serious injuries.

Rahami lay in a hospital bed in Newark on Thursday, with a white sheet pulled up high to his neck, flanked by his attorneys. The NY Times set the scene:

In a soft voice, Mr. Rahami answered “yes” to a few routine questions from the judge: Was he able to hear what the judge was saying? Had he seen a copy of the criminal charges?

One of his lawyers, Peter Liguori, did much of the talking, as he stood over Mr. Rahami’s bed, in a yellow hospital gown and blue gloves. Mr. Liguori said Mr. Rahami would be pleading not guilty to each of the charges.

Rahami's bail was set at $5.2 million. Shortly after his arrest, Liguori, a public defender, claimed in a letter to the judge that a prosecutor had denied him access to Rahami. The prosecutor allegedly said Rahami was "unconscious and unable to speak," but Liguori maintained that, "It is vital that the public defender be given access to his client so that Mr. Rahami’s medical condition may be verified and his rights are protected."

Even now, little is known about the extent of Rahami's injuries. 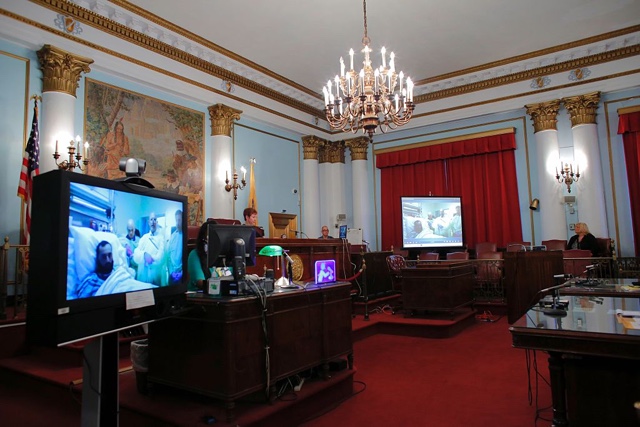 The bombings took place on Saturday, September 18th. The first pipe bomb detonated that morning in Seaside Park, New Jersey, causing no injuries. Two others were recovered from the area but did not detonate. The second explosion occurred on West 23rd Street between 6th and 7th Avenues in Manhattan at 8:30 p.m., injuring more than 30 people.

Rahami is also facing federal charges, including bombing a place of public use and using weapons of mass destruction. His federal court arraignment has yet to be set.

A naturalized U.S. citizen from Afghanistan, Rahami was living above his family's fried chicken restaurant at the time of the bombings, where he also worked. He was known as a "nice guy" who would give free chicken to customers, but friends and family said he became more religious and serious after traveling to Afghanistan a few years ago.

"It's like he was a completely different person," childhood friend Flee Jones told the NY Times last month. "He got serious and completely closed off."