If you haven't been up to Javits Center or the top of the High Line, you might not be aware how much construction is going on around the new Hudson Yards. One building is nearly topped out on site, and a massive deck has been laid for several others soon to come. At least ten cranes dot the site, some dozens of stories tall. And it's all surrounded by an enormous amount of other development at nearby sites— along the High Line to the south, Manhattan West a block east, and heavy construction along the new 7 Train extension to the north.

This morning we went over for a tour of the current state of development. Most of the work is going on in the East Yard, which is between 10th and 11th Avenue, and 30th and 34th Street. This plot will soon be occupied by four office buildings, a huge mall, the mind-boggling Culture Shed (which slides open to create an enormous concert hall), a hotel, a residential building, and a big "Public Square." 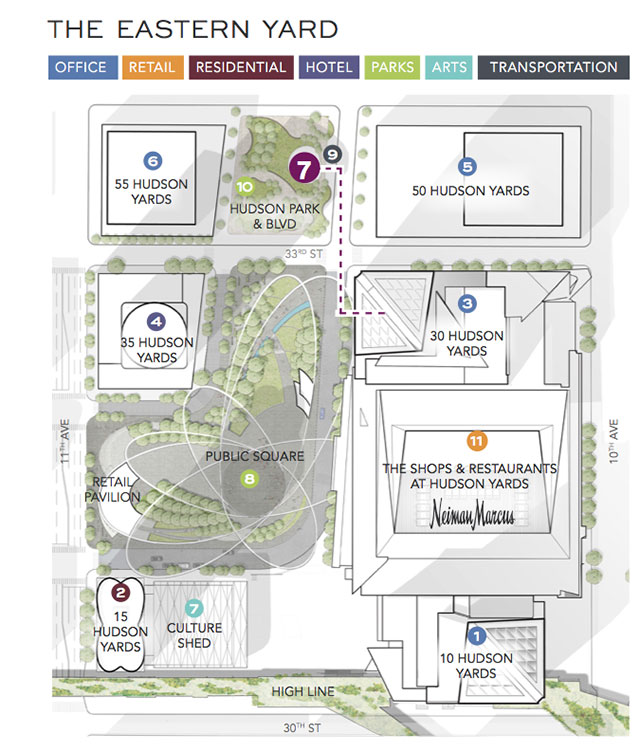 We also got a glimpse of the West Yard, which will come later, featuring a slew of residential towers (with some affordable housing), more open space, a school, and another office building. This is all being built on the site of the MTA Rail Yards, which continue to operate below the construction site, along with a forthcoming Amtrak tunnel, which has already been placed below the deck.

The project began around 2008, in the wake of the failed Bloomberg Administration's 2004 Olympic / West Side Stadium project. That was never realized, but the area was still rezoned, and Related Companies won the bidding to take over the site, kicking off a land rush in an area of the West Side that was still mostly composed of truck yards, stables, low factories, and Lincoln Tunnel on-ramps.

The city and state threw a ton of money at the area, including a couple of billion for the 7 Train extension which opens into a park and plaza just north of the Yard. The new transportation and other amenities (park, gym, restaurants, bars... even a 1100-feet-tall open air observation deck on one of the buildings), is attracting corporate tenants. Coach, SAP, and L'Oreal are going into the almost complete 10 Hudson Yards Building, Time Warner has contracted for one million square feet at another building on the northeast corner of the site, and Neiman Marcus is putting in a big store at the top of the retail building fronting 10th Avenue.

The High Line also meets the Yards right at grade at the south side of the site, so many people will probably end up crossing the new Public Square from the 7 Train stop, making their way down the High Line towards the new Whitney at the south end.

Some other interesting facts about the project:

#Chelsea
#development
#hudson yards
#real estate
#original
Do you know the scoop? Comment below or Send us a Tip