In an effort to turn LaGuardia into a first world airport, Governor Andrew Cuomo announced the start of construction on a $4 billion overhaul of Delta's facilities on Tuesday. The groundbreaking was approved by Port Authority last month, and is being touted by the governor as the "final component of the entirely new, unified airport."

Today’s groundbreaking at @Delta’s facilities represents another step forward as we build an entirely new airport at LaGuardia. pic.twitter.com/iY6IJrpcjA

The massive redevelopment project would create a new 37-gate terminal located on a centralized hub, rather than in four separate buildings.

Funding for the effort is mostly the responsibility of Delta, which chipped in $3.4 billion and will be on the hook for any cost overruns. The Port Authority of New York and New Jersey—which owns the airport—kicked in the remaining $600 million. The authority also just signed a new, long-term lease with Delta.

Cuomo's press conference occurred at the same time MTA Managing Director Ronnie Hakim faced tough questions from City Council members about the subway system's ongoing crisis and how to fund long-overdue infrastructure upgrades. Some critics and transit advocates say Cuomo, who effectively controls the MTA, has neglected the sprawling subway system in favor of flashier projects like flashy bridge lighting and a light rail to LaGuardia that would do little to shorten mass transit travel time there. 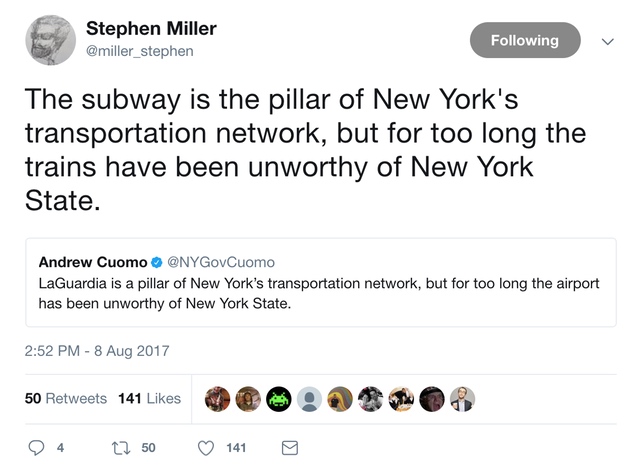 Also on Tuesday, Cuomo announced a breakthrough on construction of the airport's western half, currently being built by LaGuardia Gateway Partners. That firm will now partner with the JLC Infrastructure Fund, which was launched by Magic Johnson earlier this year. It's the first instance in New York history of a minority-owned firm investing equity in a public-private construction project, according to Cuomo's office.

The first new gates are scheduled to open next year and the new airport is expected to be fully completed by 2021. It's unclear what any of this means for Cinnabon.

#airport
#Cuomo
#delta
#laguardia
#public-private
#redevelopment
Do you know the scoop? Comment below or Send us a Tip