Check Out MTA's New "Subway Time" App, Which Lets iCommuters Know When Next Train Is Coming

Outgoing MTA chief Joe Lhota bid farewell to the MTA today by unveiling a new tech toy that could make commutes a little easier, at least for some riders. Subway Time, the MTA's newest smart phone app, displays those handy countdown clocks for subways in real time. "Whether you're leaving your apartment, or standing on the corner, or walking here through Grand Central Terminal, you'll be able to look at your iPad or iPhone to see when the next train is coming," Lhota said at a press conference this morning. "You'll be able to do this at any time, anywhere, knowing whether or not you need to hurry up and get to the train, or wait for the next one and get that extra cup of coffee."

To be sure, the app is still a work-in-progress. As of today, it only shows arrival times for the 1, 2, 3, 4, 5 ,6 trains and the 42nd Street S shuttle, so that soul-crushing feeling triggered by watching passengers swarm the 14th Street Tunnel of Hell as the L train pulls away below is not quite a thing of the past. Plus, if you're still masochistic enough to own an Android, you're out of luck, since the app, still in Beta-mode, is currently only available on iPhones, iPads and iPod Touches. (There is also a desktop version.) Lhota says they're working on similar apps for other devices, and they hope to start rolling out countdown clocks for other train lines in the near future, though they say it'll probably be two to three years before Subway Time is universal. "We're still in a test mode," Lhota admitted. 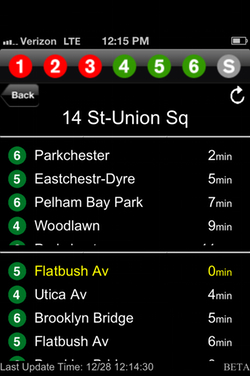 We tried out the app ourselves and found the graphics little prehistoric for our liking since, in the Angry Bird era, we'd hoped to see a little animated Lhota beeping at us for blocking the turnstile as we dig for a MetroCard. But for anyone riding the 7th Ave and Lexington lines, it does seem helpful.

Users can choose the icon for their specific stop and get a rundown of the next four or five trains in both directions, which is also helpful for anyone transferring to and from the express and local trains—assuming they can get a signal underground. (The MTA insists that someday the entire subway system will be wired, possibly as soon as... 2018.) While apps like EmbarkNYC are also able to estimate the arrival time of the next train, Subway Time uses the MTA's new open cloud-based system to get destination data as the train moves, making it accurate to the minute. And the app syncs with TripPlanner to alert you about service changes and line delays, so you're ready to hail a cab when something like this happens.

Lhota—whose tenure as Chairman ends on Monday so he can run for mayor— says he sees Subway Time as another big step for the MTA when it comes to beefing up on modern technology and public information. "Transparency is never a negative thing," he said. "We've got to be able to use everything available to show the public what we're doing when we're doing it." Some updates to look forward to in the future: a more integrated system when it comes to countdown clocks in stations, so if you're transferring from the 1 to the 7 (and good luck with that!) you can see how long you'll have to wait before hoofing it through a tunnel.

But of course, all these fancy tech updates don't come cheap. The MTA estimates they spent about $228.3 million updating the system to get subway arrival times from 1997 to 2008. Your fare hikes at work!