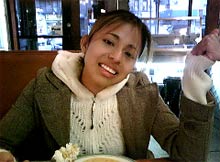 There's a new dimension to the murder-suicide of a Bronx cop and his girlfriend. Fred Maselli, who police say shot himself after killing his girlfriend Shirley Fontanez, may have been involved in a check-cashing scam with Fontanez.

The Post reports that 40-year-old Maselli may have supplied Fontanez with fake stolen checks. Fontanez, who was either 18 or 19, would cash them at her work - a check-cashing establishment in Paterson, NJ. Rivera Check Cashing fired Fontanez after she stole at least $40,000.

Monica Pineda, a friend of Fontanez's, told the Daily News that Fontanez was going to return half the money as part of a plea deal. Pineda said Maselli had purchased cars with the money and that Fontanez was trying to get back her share: "The reason he killed her is because she was going to tell on him." Fontanez's mother also said that her daughter was trying to break up with Maselli, but Maselli would threaten her daughter, text-messaging to her, "I'm going to kill you." And Rivera Check Cashing's manager Angel Orta, who said he was friends with Fontanez, told the Post, "He was jealous, but we thought we could trust him. He was a cop."

The News adds that Maselli's neighbors had called 911 about gunshots on Sunday morning, but the responding officers didn't find anything. Maselli and Fontanez were found in his apartment on Monday.