A Williamsburg councilman is looking to revive a grand plan to build a park over a stretch of the sunken Brooklyn-Queens Expressway that runs through the neighborhood. Councilman Antonio Reynoso wants to bring back the project, dubbed BQ Green, as a part of Council parks committee chairman Mark Levine's push for the city to commit $200 million dollars to an expanded park capital budget.

"History has shown us that we can do very little when we’re providing new parkland, and the parkland we do provide is never enough," Reynoso said. "We currently have the resources to do that. We have the economy to do that. So why not use long-term items to build something beneficial to the community?"

BQ Green would create parkland over more than two blocks of the BQE ditch. Robert Moses rammed the expressway ditch through the neighborhood in the 1950s, and Reynoso said the road is to blame for the area's elevated asthma rates, and serves as a convenient boundary for modern-day gangs.

The BQE has "divided our community for a long time," he said. "Robert Moses had great vision but it’s like he didn’t know how to plan, though."

The proposed park would extend a concrete-platform over the expressway between South Third and South Fifth Streets, demapping the current South Fourth Street bridge, and overhaul existing parkland that currently lines the expressway, for another half block in either direction. The plan calls for a flower garden, playgrounds, a baseball diamond, barbecues, grassy and wooded areas, and a pool and water play zone. The philosophy seems to be that if people have to live with lung-annihiliating air pollution, they might as well be able to relax in it, and have a few more trees to sop it up. In a proposal, designers from dlandstudio point to a recently constructed 5-acre park on a deck over a highway in downtown Dallas, Texas as proof that this idea can work. 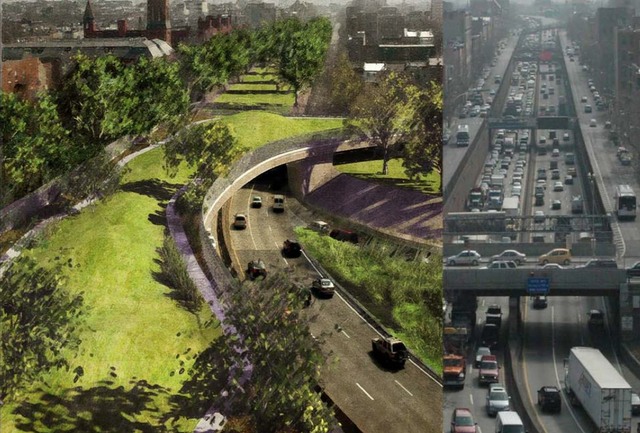 The designers went ahead and did a rendering for the BQE in Cobble Hill while they were at it. (dlandstudio)

Williamsburg has gained thousands of residents since a 2005 rezoning opened its formerly industrial waterfront up for high-rise residential development. Despite promises by former mayor Michael Bloomberg, though, nearly half of a 28-acre waterfront park remains unbuilt because his administration failed to buy the property for it, and thanks to the rezoning, the remaining 11 acres are now worth hundreds of millions. Green space was already relatively scarce in the neighborhood at the time of the rezoning—it has about an eighth of the city's average open space acreage per 1,000 residents as of 2014, and a fourth the amount recommended by the City Planning Department—and the problem isn't getting any less pronounced, Reynoso said.

"We’re not just asking for a park for the sake of a park," Reynoso said. "This community has been deprived of real parkland for a long time."

Reynoso said that the idea for BQ Green came up in 2010 during a walk with his councilmember predecessor and then boss Diana Reyna, now deputy borough president for Brooklyn. Bloomberg was not interested in the plan, but Reynoso said he worked with Reyna to commission a study to show the money-minded mayor that it would raise property values and promote business, and could be paid for partially through federal transportation grants, as well as unspecified private contributions.

The existing bridges, Reynoso said, are older than their originally proposed lifespan, and the green space could have been packaged as a bike and pedestrian transportation project. The consultants Reyna hired put the price tag for BQ Green at $100 million, but to even be considered for the federal money, they needed Bloomberg's sign-off, and he passed on the project completely. 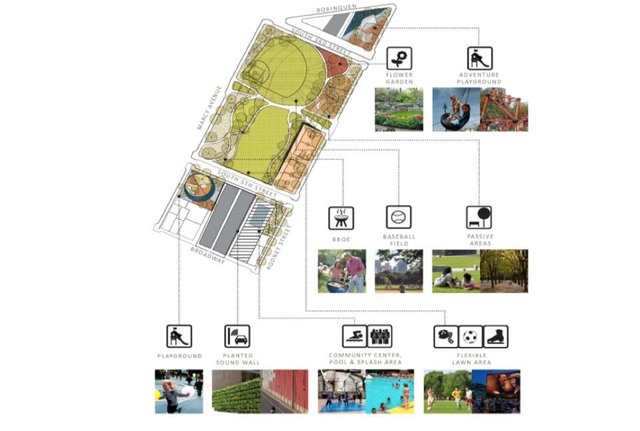 The proposed design includes a baseball diamond and a pool. (dlandstudio)

Now, Reynoso is in office and his colleague, Levine, is proposing an ambitious parks agenda on the scale of Bloomberg's, but focused on less affluent areas of the city that have historically been overlooked by government, rather than building the next High Line.

"Let’s start thinking big again," Levine told the Council in March, noting that the city is $14 billion below its borrowing limit. "Let’s double down on investment in our parks. Let’s bring spectacular new green spaces to life for the New Yorkers who most stand to benefit."

The city currently has $2.265 billion lined up for park capital spending over the next 10 years, including $285 million for the Community Parks Initiative, described by City Hall as "a citywide program to improve historically under-funded parks in densely populated and growing neighborhoods with higher-than-average concentrations of poverty." Levine said the additional $200 million he wants would give the city the chance to create ambitious new parks and fix up "the mid-sized parks that are so critical for neighborhoods all over the city that we don’t have the money to renovate currently." He said that Mayor Bill de Blasio has not so far indicated he'll approve the spending, but that feedback from fellow councilmembers has been "overwhelmingly receptive."

In a statement, Mayor's Office spokeswoman Natalie Grybauskas pointed to de Blasio's increasing the commitment for the Community Parks Initiative and setting aside $50 million for a program called Parks Without Borders, aimed at making parks more inviting, as evidence of his commitment to park capital funding. On Levine's proposal, she said, "We look forward to discussing all of the Council's budget priorities as we approach adoption." 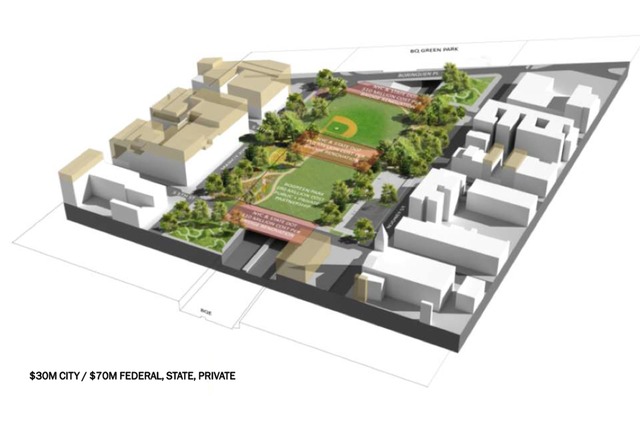 Also, though the Council and de Blasio have been criticized (de Blasio by some on the Council) for ballooning spending and possibly not socking enough away for a recession, Levine said more spending on parks construction would actually buttress against an economic downturn.

"During times of economic uncertainty, capital investment is good policy," he said. "You get people working. It's cyclical—it can actually stave off an economic recession."

Levine said he'd like to see several million go to fixing up Fort Washington Park in Washington Heights, a project in his district begun but not finished under Bloomberg. 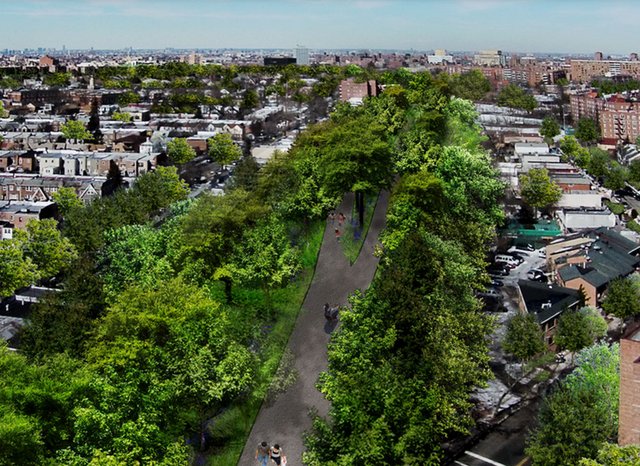 Speaking of ambitious park proposals, here's the Queensway, a proposed park on abandoned elevated train tracks in central Queens. (Courtesy of The Queensway)

Other projects he floated as candidates for capital money included:

Whatever becomes of BQ Green and the budget proposal, Reynoso said that he appreciates Levine for being willing to consider lofty proposals.