Challenges to Brooke Astor's Will 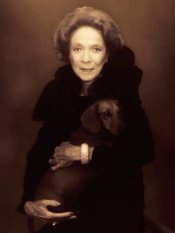 Brooke Astor's funeral service will be held tomorrow afternoon at Saint Thomas Church in Manhattan, but legal papers have already been filed contesting the doyenne of NYC philanthropy's will. Family and friends have been arguing about the legitimacy of Mrs. Astor's final will and testament for a while now, after major adjustments were made to the document in 2002 - a time when Astor was allegedly suffering from reduced competency - as well in the following years.

The New York Times reports that her court-appointed legal guardians, Annette de la Renta and JPMorgan Chase & Company, are petitioning for the courts to recognize a 1997 version of the will. De la Renta and the bank were appointed by the court following accusations that Astor's son had fraudulently benefitted himself as her estate's executor.

The bulk of Brooke Astor's estate is destined for the Metropolitan Museum and the New York Public Library, as details of her will leaked to The New York Times indicated earlier this year. The contested changes to the will involve large sums of money being transferred to her son by her first marriage, Anthony Marshall, who was accused by his own son of mistreating Mrs. Astor. Vincent Astor, the grandson of John Jacob Astor IV, was Brooke Astor's third husband.

Yesterday, the Times described the arrangements of Mrs. Astor's funeral scheduled for 2:30 pm tomorrow afternoon at Saint Thomas Church on 5th Ave. and 53rd St. Given the rancor and legal wrangling among family members and friends, it is possible that the pallbearers at the service will be U.S. Marines (Brooke Astor's father was the 16th Commandant of the Marine Corps).

The New York Post reports a rather strange detail - audio of the funeral service will be webcast from the church's online site, saintthomaschurch.org - while the Daily News wonders who is selling tickets to the funeral on Craigslist.