Welcome to New York: A 59-year-old tourist from Terre Haute, Indiana was enjoying a stroll in Central Park yesterday when an oak tree branch snapped off and clocked her in the head. Sharon Reese, 59, was walking with her husband when the tree attacked near a park entrance at West 86th Street around 3:30 p.m. Fortunately, unlike other victims of falling branches, she survived—albeit with a broken arm and chipped teeth, according to the Post.

"It was just one of those freaky things," her husband told the tabloid. "She’s hurting, but she’s going to be OK." The Times reports that the branch fell about 40 feet before landing on Reese, who was briefly knocked unconscious and could not remember how she ended up on the ground. A children's birthday party was happening nearby at the time, and one nanny tells the Post, "She was bleeding on the left side, close to her temple. I was shocked. I couldn’t believe what I saw. I heard a big noise [and] a big crack."

One witness who tried to help the victim emailed Gothamist last night to share what he saw:

There was a sudden strong gust of wind. I heard and saw a tree branch crack then fall. Heard someone crying. Approached. Woman was on the ground with a man (assume husband) leaning over her and helping her. Several others were already there and calling 911. Helped the man open an umbrella. Held the umbrella over her head (it was raining a little). Gave the man a compress and he held it to her head (he was using his hand before). Gave him my shirt that he folded up and placed under her head. Waited for police and ambulance to arrive.

She was conscious and speaking with the man I assumed to be her husband. I saw the branch fall, but didn't see where it hit her. I heard someone say that the branch knocked her to the ground and she fell face first to the paved walkway. I believe she had a cut to her head and damage to a tooth, possibly lost a tooth. The man asked her to remain on the ground while he applied pressure to the wound on her head and they waited for the ambulance.

Geoffrey Croft of NYC Park Advocates said it was the second time this month that a tree branch had fallen on someone, and he notes that last week the city and the Central Park Conservancy settled two high profile tree injury lawsuits for a total $14.5 million dollars. 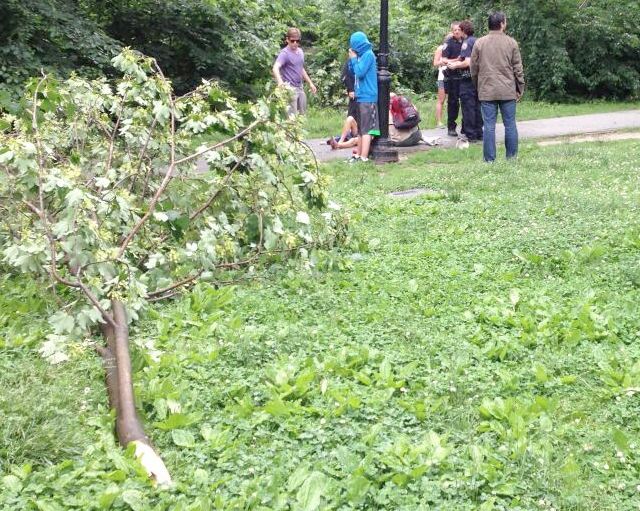 #central park
#tree branch
Do you know the scoop? Comment below or Send us a Tip