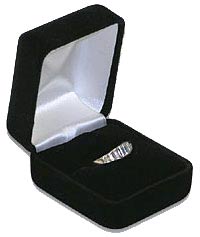 Yesterday, various news reports mentioned that a Brooklyn couple had been mugged in Central Park around 8:45PM on Saturday night. And if you're wondering what they were doing there after dark, the Post has the explanation: The boyfriend had just asked his girlfriend to marry him.

Luke Jacunski said that he chose the gazebo near Strawberry Fields to propose to Mimi Nagasse. Just after she said yes, a man holding a gun came along and yelled, "Give me your money and get down on the ground! Give me your jewelry!" As the couple went to the ground, Jacunski "managed to slip the silver engagement ring off of his fiancée's finger." Jacunski managed to keep the ring hidden as the robber divested them of other belongings.

All told, the couple had to give up other jewelry (including Nagasse's family heirloom Rolex) and cash (which Jacunski was going to spend on an engagement dinner) but were luckily uninjured. They spent the evening going over mugshots at the Central Park NYPD precinct. Jacunski told the Post, "It was supposed to be a special night - but it turned out kind of crazy. It makes for a pretty good story for our anniversary. The only thing I cared about was making sure she was OK."

This story reminded us a little of the 2005 Central Park daytime mugging of a woman and her baby. The mugger was probably attracted by the woman's 5-carat diamond ring that was actually fake (the woman bought it because the pregnancy made it difficult to wear her real one) The robber did manage to take her wedding ring, but the woman was glad she and her son were safe, even joking, "He's a real New Yorker - now that he's been mugged finally and he's not even 4 months old."

#As
#baby
#brooklyn
#central park
#crime
#gun
#money
#new yorker
#nypd
#strawberry fields
Do you know the scoop? Comment below or Send us a Tip