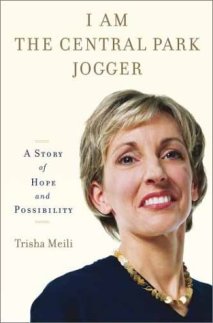 Trisha Meili, the woman who was brutally attacked and raped while jogging in Central Park in 1989, is no fan of Oprah Winfrey's line of questioning. Five years after she gave her first interview to Winfrey's magazine O, Meili spoke to NY1. First, here is an excerpt of the 2002 interview Meili (who did not disclose her name at that time) gave to Oprah:

Oprah: When I first heard about you, I thought, why were you running alone in Central Park at night?

Central Park Jogger: You're not the first person to say that. For me, running was a release at the end of the day, and I had this feeling that, hey, I have every right to run where I want, when I want. I'd been running in the park for two years. It was not a smart thing to do. Yet that is absolutely no justification for what happened to me.

O: And believe me, I'm not sitting here trying to justify it. But the idea of running alone in Central Park is a foreign concept to me. You had to be the kind of person who either thought you were invincible or who was just nuts.

CPJ: I wouldn't say I was nuts, but maybe I thought I was invincible

During her recent interview with NY1, Meili said, "If she were to ask me that question now I'd say, ‘If that isn't a blame the victim question, I don’t know what is,’ because that's exactly what it feels like. So it’s like, okay so it’s my fault that I was out there? And what about all those young men who were out there at that time? I think that's still one of the most difficult battles that sexual assault survivors and those who support them need to fight."

An O Magazine spokesperson told NY1, "We’re sorry to hear Ms. Meili felt this way about her 2002 interview with Ms. Winfrey. Oprah Winfrey is and has always been an advocate for victims of sexual abuse of any kind." Hmm, not very good timing for Oprah, as she's dealing with the claims of sexual abuse at her school in South Africa.

CityRoom points out that Meili did other interviews with talk show hosts Larry King and Katie Couric who asked her very similar questions, but those interviews were in 2003, when Meili was promoting her book, I Am The Central Park Jogger. It seems that the question was fair - as it's probably a question that many people have - but that Meili has formed a clearer way to answer it and question society's response to sexually based attacks.

Meili, who lost 75-80% of her blood during the attack, recovered enough to run the NYC Marathon in 1995 and is now a motivational speaker and works with The Sexual Assault and Violence Intervention Program at Mount Sinai and the Achilles Track Club. Five teens were convicted, but their convictions were vacated when another man, Matias Reyes, claimed he was responsible and DNA evidence confirmed it. However, Meili still suspects the five teens were involved in the attack.