It was the crime that horrified New York City and the nation. On April 19th, 1989, a female investment banker jogging in Central Park was raped and nearly beaten to death. Police arrested five black and Latino teens, ages 14 to 16, and the boys were later convicted. But it turned out they never committed the crime, with a prison inmate's confession and DNA evidence clearing them in 2002. Now, the city has finally settled with the "Central Park Five" for $40 million. 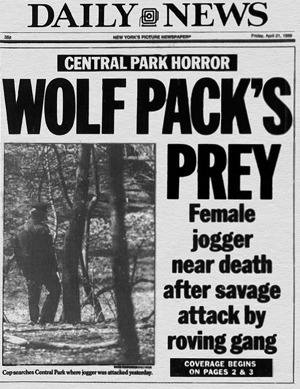 The agreement, reached between the city’s Law Department and the five plaintiffs, would bring to an end an extraordinary legal battle over a crime that came to symbolize a sense of lawlessness in New York, amid reports of “wilding” youths and a marauding “wolf pack” that set its sights on a 28-year-old investment banker who ran in the park many evenings after work.

The confidential deal, disclosed by a person who is not a party in the lawsuit but was told about the proposed settlement, must still be approved by the city comptroller and then by a federal judge.

The initial story of the crime, as told by the police and prosecutors, was that a band of young people, part of a larger gang that rampaged through Central Park, had mercilessly beaten and sexually assaulted the jogger. The story quickly exploded into the public psyche, fanned by politicians and sensational news reports that served to inflame racial tensions.

The Daily News recalls that

"as the newspapers howled for arrests of the marauding teens and then-mayor Ed Koch called it 'the crime of the century,' real-estate mogul Donald Trump took out ads calling for the return of the death penalty. Trump wanted 'criminals of every age' involved in the Central Park jogger case 'to be afraid.'"

The teens had been in Central Park, but the police, eager for an arrest, apparently coerced them into confession during 24 hours of questioning. Antron McCray, Kevin Richardson, Raymond Santana and Korey Wise served nearly six years in prison while Yusef Salaam served almost 13 years. But in 2002, Manhattan D.A. Robert Morgenthau said (PDF) the convictions should be vacated, after an inmate named Matias Reyes, serving time for a rape-robbery, rape-murder and robbery, confessed to the 1989 Central Park rape. Testing showed his DNA matched the DNA found at the crime scene.

The Bloomberg administration had refused to settle with the men, but before he was officially mayor, Bill de Blasio signaled he wanted to settle the case.

Filmmaker Ken Burns made a documentary about the case:

NYC settles w/ Central Park 5 for huge victory for those of us who were ridiculed for standing with them and even provided for them.

The jogger, Trisha Melli, has said in the past that while Reyes confessed, she still believes the Central Park Five were involved.