The NYPD is once again aggressively enforcing traffic laws in Central Park. We haven't heard anything about them ticketing drivers, mind you—the focus, as usual, is on cyclists. West Side Rag has reported that cops with radar guns have been stopping cyclists who speed through the park (we've seen that movie before), and one cyclist emailed us recently to let us know that he got hit with two tickets totaling $550. And he says the second ticket—for allegedly failing to yield to a pedestrian—was issued because he wasn't nice enough to the cop who stopped him. 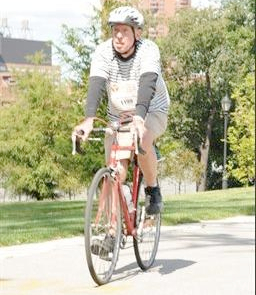 (Dworkin on his bike in happier times)

Richard Dworkin, a musician who lives in Chelsea, was stopped in Central Park for running a red light on Saturday of Labor Day weekend. He calls it "a sting operation" and that while he was waiting for the ticket to be issued, he told the officer, "I've been riding in Central Park on Saturdays since before you were born, and rarely seen anyone, including police officers, pay any attention to traffic lights when the park is free of motor vehicles." In an email to Gothamist, he continues:

Why has the NYPD suddenly decided that the Central Park loop's twenty-some traffic lights must be obeyed—by cyclists only—when there are no cars in the park? They were not ticketing jaywalkers or, so far as I know, skateboarders or wheelchair operators.

When I asked the cop why he was giving me a second ticket, based on the presence of an imaginary pedestrian, he said, "I wouldn't if you had been nicer to me." I guess I was supposed to thank him for enforcing a never-enforced and questionable "law." As for him mouthing that stuff about "only doing my job" when the absurdity of this operation was pointed out to him—I would never equate the NYPD's inexplicable eight-year war on cyclists with the Holocaust, but one would hope that officers would have the cultural sensitivity not to use that line with old Jews encountered uptown.

While the officer was writing one of my summonses, two guys went the wrong way on the drive, right through the red light in front of the boathouse. Well, he said, "I didn't see it." He looked up, and a third followed—not that he stopped him, or anything.

Now these cyclists were actually dangerous. But is EITHER PART OF THAT—1) going the wrong way, 2) through a light—even illegal, when the park is closed to cars? What's doubly astounding is the time they chose to have this operation, which involved at least four vehicles and a half dozen cops, who clearly have nothing better to do (see the recent Comstat report for the precinct). They were not netting wealthy Lycra-clad, carbon-fiber-riding speedsters; they were levying $275 fines on us poor suckers who couldn't afford to get out of town on the last holiday weekend of summer.

Who is served by this absurdity? I am only a pawn in their game, but for $550—which I really, truly, totally can't afford and will be paying off at 19 percent credit-card interest—I'd at least like to know.

In March of 2011, hundreds of irate cyclists showed up at a meeting with the Central Park Precinct’s Community Council, where Captain Philip Wishnia "offered no hope that his precinct’s enforcement of red-light laws at each of the loop road’s 47 traffic lights will abate, nor any assurances that his officers will exercise meaningful discretion." And yet, the ticketing blitz did seem to abate, or at least there were far fewer reports of red light tickets emerging from Central Park.

Tonight there will be another Central Park Precinct Community Council meeting, and Dworkin says he'll be there to send a message to the precinct's commanding officer. And as an added bonus, the guest speaker is an agent from the FBI! If you're curious, the meeting takes place at 7 p.m. at the Central Park Precinct, located on the 86th Street Transverse Road.

#central park
#cyclists
#nypd
#original
Do you know the scoop? Comment below or Send us a Tip