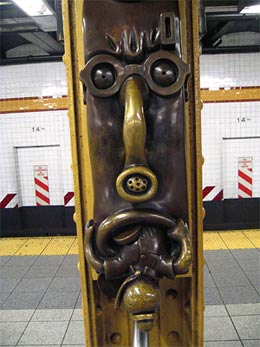 Two years after asking various companies to bid to bring cellphone service to the subways, the MTA has finally picked a vendor to wire all stations. Here are the details:

The NY Times explains that "all areas of the stations, including entryways, mezzanines, platforms and transfer passages, will be wired" and that the system will be "designed to allow a seamless connection between the train and street level." We like what Transit Wireless is thinking, but we imagine it'll take about six years to work out those kinks.

Transit Wireless's total bid of $46 million beat out other bids, including one that was as low as $6.2 million. One unattractive part of the deal was that the vendors would foot all the bills for construction and installation, not the MTA. Big investment aside, the hope is that other cellular providers will pay big bucks to access to the system. A Transit Wireless partner, Gary Simpson, tells the Daily News, "There's need and a demand by riders and customers to use their cell phones down in the stations. Once customers are demanding it, the carriers will have to respond to that demand."

And Representative Anthony Weiner cracked to the Sun, "It took Alexander Graham Bell less time to invent the telephone than it takes to install service in the subway system...What they've decided to do is provide the Cadillac of service on six stations — my quibble is that we would should have had more stations getting emergency service quicker."