Celebration Leads to Arrests in Williamsburg 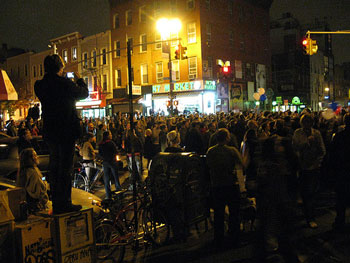 As spontaneous parties broke out on every corner last night (just check out St. Mark's Place), things got a little bit crazy in Williamsburg once Barack Obama was declared leader of the free world--and there's nothing like a peaceful celebration to bring out the cops in riot gear! One tipster writes in about a reveler's run-in with the long arm of the law on North 7th and Bedford.

We were trying to get onto the sidewalk, as requested but hard to do when it is packed. The police pushed my boyfriend because he wasn't moving fast enough and when he spoke back to them the incident escalated.

He was basically thrown to the ground, hit with billy clubs and then arrested for disorderly conduct, resisting arrest & obstructing governmental administration. Others who got arrested were only given a summons, however a police officer hurt himself while arresting my boyfriend. That is why he is still in central booking in Brooklyn.

We contacted the 94th Precinct and when asked how many arrests were made at this particular party, an officer told us "there's about six in there." Another tipster who was waiting at the station for a friend to be released, emailed in that he asked two officers about why the riot gear was brought out (unsurprisingly, they told him it was for their protection), and noted the sight of it was "unsettling" and probably caused things to escalate.

Some more tales from the front line here, and below is some footage showing just how much things did escalate towards the end--and to think, this kid caught on tape was just trying to celebrate on the street in his pirate outfit!

And an aerial shot, and more street scenes of the Williamsburg celebration after the jump.

UPDATE:Brooklyn Vegan has plenty of shots of The Law in action. And now CityRoom has word from the police, who told them that all in all three people were arrested, and five issued summonses. One officer told them that after receiving 911 calls from residents, “We just wanted them to get on the sidewalk, and eventually they did."

One of those arrested was charged with assaulting a police officer who Mr. Browne said suffered a broken thumb in trying to make the arrest. Another was charged with obstructing governmental administration and a third with resisting arrest, he said.

In addition, a duty captain at the scene suffered injuries to his face and head after being hit by a bottle and a police officer injured his back when he was pushed by crowds and fell down, Mr. Browne said. No arrests were made in connection with those two incidents.

They also note that there were no arrests at other areas in the city where crowds gathered.

Top photograph of a spontaneous celebration in Williamsburg via minicloud's flickr.