Celebrated Sculptor Getting Kicked Out Of Apartment After Landlord Allegedly Lied

An immigrant sculptor whose work has been hailed by former Mayor Bloomberg as having "made an indelible impact on the creative life of our City and beyond," is now being evicted from his Diamond District home after his landlord misled him about his rent-stabilized status. Now, the 74-year-old Soviet immigrant Alexander Ney is in a race against time to pack up his belongings before they are seized by city marshals

"They [the landlord] told him that it was rent-stabilized, and that's how they determined the rent," Alexander's son, Joel, told Gothamist this morning while packing up sculptures in his parents' West 47th street apartment. "But they never filed the correct paperwork with the DHCR, and now the landlord is trying to raise the rent to four times the previous amount."

The six-room, two-bathroom apartment, with high ceilings ideal for the creative Russian couple (Alexander's wife, Liz, 71, is also an artist), is filled with hundreds of sculptures, some of which have sold recently for as much as $30,000.

"We're working every day to get things out in time, but we have very little resources," Joel said, explaining that while his father's work did sell for large amounts, each sale took months to arrange, and had to be shared with the auction house or dealer. "I'm worried that the city marshals can come in as soon as tomorrow and seize decades of my father's work."

The older Ney immigrated to the United States in 1974, escaping from a country that demanded realism from its artists. When Ney moved to the Diamond District that same year, he thought he had found the home where he could spend the rest of his life. The landlord at the time, Joel Ney explains, was happy to have some peaceful artists in the apartments in an era when the neighborhood was much rougher. 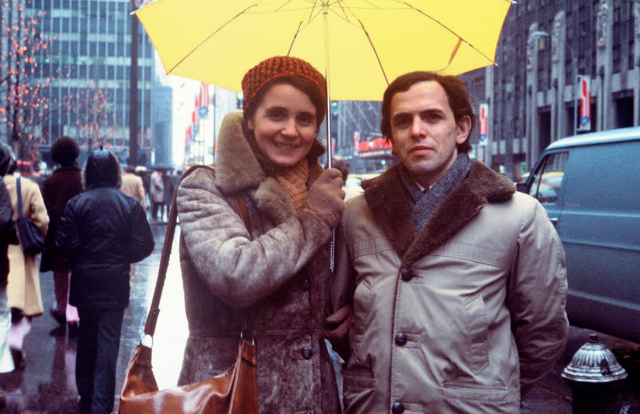 Alexander and Liz Ney, shortly after their arrival in New York City.

"But now that landlord passed away and his children have taken over. They have begun evicting us and haven't offered a buyout. After this, my parents will live with random, dispersed relatives. We have nowhere to really put them," Joel said.

The Neys have avoided eviction so far by involving Adult Protective Services, which works to make sure that the elderly aren't put out on the street. Still, Joel shudders to think of his parents being placed in a shelter.

"Once Adult Protective Services finishes their assessment of my parents, the marshals can come as early as tomorrow to seize the property," Joel told us.

The Neys have been shuttling back and forth to storage spaces on Long Island, but the moving of over fifty years of art has proved to be an almost insurmountable task.

"We'd love to sue, but that takes time and money and a lawyer not looking for a buyout," Joel said.

Tonight Joel will be taking a U-Haul full of art to a storage space as part of a "last hurrah" before the eviction proceeds. Until then though, the family continues to pack away as much as possible, and hope that somehow they can regain any of the stability that has been taken away from them, thanks to a neglectful landlord.

"We don't have the money to hire movers, so we have to do this all ourselves," Joel said. "To me, it's so important to save the artwork. Of course, we'll find somewhere for my parents to live, it won't be ideal, but if we lose the artwork, that would be tragic."

#Alexander Ney
#art
#eviction
#real estate
#rent
#Sculpture. Diamond District
#original
Do you know the scoop? Comment below or Send us a Tip