The FBI raided synagogues and homes in ultra-Orthodox Jewish communities in Brooklyn and Monsey, New York on Wednesday night, arresting ten men—two of them rabbis—who were allegedly part of a wild kidnapping, torture and extortion scheme. According to federal prosecutors, the head of a Monsey yeshiva, Rabbi Mordechai “Martin” Wolmark, and nine others kidnapped and tortured as many as 24 Orthodox Jewish men to force them to agree to a divorce with their wives. 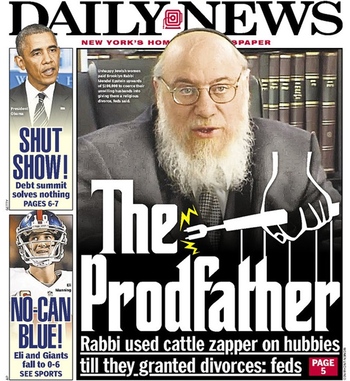 Daily News: Still Got It

Jewish tradition requires a woman to obtain a ritual divorce, or "get," from her husband before she can remarry in the faith. But some husbands can prove recalcitrant, and Wolmark and his cohorts allegedly helped women get the get by beating it out of their husbands. Prosecutors say they were paid handsomely for their efforts, in most cases charging upwards of $80,000.

"They didn’t do it out of religious conviction,” Assistant U.S. Attorney Joseph Gribko told a judge yesterday. "They did it for money. Frankly, even if it was about religion, you shouldn’t be able to torture people to get them to do things."

One victim told the Daily News that Wolmark's alleged partner, Rabbi Mendel Epstein, and his henchmen brutally tortured him into granting a divorce: "They forced it (the get) on me. They busted my fingers, busted my ribs. They kept me handcuffed. These gets aren’t kosher. They force it. It destroyed me."

According to the criminal complaint, Epstein and his associates used an electric cattle prod to get results. The weapon was preferred because it wouldn't leave a mark—Epstein allegedly believed police would be less likely to investigate if a victim without visible bruises reported the crime. "Basically the reaction of the police is, if the guy does not have a mark on him then, uh, is there some Jewish crazy affair here," Epstein allegedly said to an undercover FBI agent. "They don’t want to get involved.”

"Basically what we are going to be doing is kidnapping a guy for a couple of hours and beating him up and torturing him and then getting him to give the get." Epstein allegedly told the undercover FBI agent, adding that he would "take an electric cattle prod [and] put it in certain parts of his body and in one minute the guy will know."

#divorce
#get
#jews
#ultra-orthodox community
Do you know the scoop? Comment below or Send us a Tip