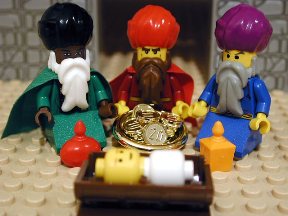 Oh, Catholic League - it isn't even Halloween and you're getting ready for Christmas already! The Sun reports that the Catholic League sent a letter to Schools Chancellor Joel Klein questioning why nativity scenes cannot be displayed in schools.

Christmas trees are allowed, as are menorahs and symbols for Ramadan. But the Department of Education does not allow actual images of "religious figures or deities." The DOE e-mail to the Sun read, "Our holiday policy was upheld by the courts and our policy does not allow for the crèche," referring to the a 2006 2nd Circuit U.S. Court of Appeals decision. But the decision didn't have a stance about creches specifically, leaving room for the Catholic League's William Donohue to say, "What we want is parity: if Jews and Muslims are allowed to display their religious symbols, it is nothing less than insulting to tell Christians to be satisfied with a secular symbol at Christmastime."

City Council Tony Avella had introduced a resolution to allow nativity scenes to be included back in June, saying, "The menorah and star and crescent are religious symbols. By adding a nativity scene/crèche to the holiday display, Christianity will receive equal representation with other religious faiths during the holiday season." All we can say is that we want Joel Krupnik and his family to design the creches - they do awesome holiday decoration work.