After spending tens of thousands of taxpayer dollars to fight a Freedom of Information Law request, the Bloomberg administration has been forced to make public a series of embarrassing emails in regards to Cathie Black, the Schools Chancellor who was forced to resign after 95 turbulent days. The emails don't immediately appear to show any unethical behavior—aside from the overarching unethical behavior that would have placed the fate of The Children into the hands of someone so unqualified. But they do reveal the acute desperation with which Bloomberg's team tried to shove a wholly inappropriate candidate down the city's throat.

The emails reveal that Black, a publishing executive at Hearst Magazines with zero experience in education policy, was eager to win endorsements from prominent people, most notably Oprah Winfrey. Black courted Winfrey through mutual friend Gayle King, and in one email to Winfrey, Black even suggested talking points for the talk show host. Oprah could, for instance, praise Black thus: "tremendous leadership, excellent manager, innovator, mother of two and cares about the future of all children. Grace under pressure.” Black's email to Oprah ends: “I owe you big time." 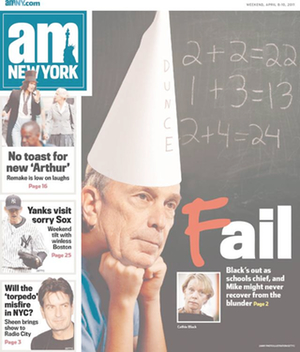 Oprah did ultimately come to Black's defense, despite Black's complete lack of experience. In a front page story in the Daily News, Oprah described Black as "tough as nails” and “a tremendous champion for the children of New York." When the story appeared, it was a ray of light in an otherwise dark deluge of bad press, and Bloomberg's then-press secretary Stu Loeser was elated, sending an email to his colleagues marveling, "I was surprised to learn that we succeeded in [having] Oprah knock a crime story off the cover."

Black and Bloomberg's team were working overtime to spin the press coverage of her appointment, and kept a list of prominent women from whom they sought endorsements. These included Gloria Steinem, Whoopi Goldberg, Diane von Furstenberg, Bette Midler and Nora Ephron. (Ephron and Midler declined.) "Would we want Ivanka Trump?" Black asked Bloomberg's legislative director Micah Lasher. "Think she would do." Lasher replied, "I would skip." Okay, what about Tinsley Mortimer? Maybe Paris Hilton? If only Lena Dunham had been famous in 2011!

The emails show that Black was really stressing out about winning endorsements, and was especially desperate to win the approval of Caroline Kennedy, daughter of former President John F. Kennedy, who'd had her own ordeal with the press when she tried to run for the senate seat vacated by Hillary Clinton. "Though we have met only briefly, I just wanted to reach out and say hello,” Black wrote in an early-morning email in November 2010. “If you would agree to add your signature to that list [of supporters], we would be very grateful.”

Kennedy took her sweet time replying, and later that afternoon Black, glistening with flop sweat, emailed a Bloomberg deputy: "I sent this at the crack of dawn but no response. Have you heard anything?"

Bloomberg overruled top advisors in appointing Black to replace Joel Klein, and an uproar ensued as soon as the appointment was announced. Klein himself did not endorse the choice, and Black had to obtain a special waiver from the state education commissioner because of her lack of experience. This was ultimately granted, but the public never accepted the appointment, and Bloomberg finally asked her to step down. In retrospect, she should have asked for Ivanka Trump's help after all.

The emails were released last night after a lengthy court battle that began when a former Village Voice intern, Sergio Hernandez, filed a Freedom of Information Law request for emails related to Black's hiring. Now here they are; was it worth the wait?

#bloomberg
#cathie black
#education
#FOIL
#freedom of information law
#schools
Do you know the scoop? Comment below or Send us a Tip