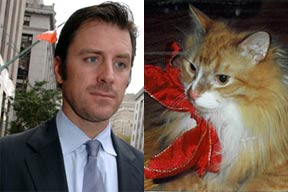 Joseph Petcka, whose trial for animal cruelty ended in a mistrial, has been making the rounds with the media to work on his image. He appeared on the Today Show and Inside Edition, where he said, "I hope there's something I can do in this lifetime that will make them see that I'm a person that loves animals."

Petcka, a 205-pound former minor league player in the Mets farm system and now aspiring actor, kicked his then-girlfriend's 7-pound declawed cat so badly that the cat died of extensive injuries--broken ribs, broken teeth, lacerate tongue, a chest full of blood. Eleven jurors believed that Petcka deliberately wanted to hurt the cat (prosecutors suggested Petcka was jealous of the cat and took his anger at his girlfriend out on the feline), while one juror held out, believing that Petcka did not intend to hurt the animal. (Petcka says he's thankful for that one juror.)

Petcka's defense lawyer Charles Hochbaum sought to clear up nuances of the case with Today's Matt Lauer, "We’ve never suggested this is self-defense. What we suggested is this was a bad reaction to a bad situation. What the law … requires is depraved and sadistic conduct, which was never present in this case.” Hochbaum added that the charge was "ridiculous."

The Manhattan DA's office says it's considering its option, including a retrial. Petcka is back to waiting tables and told Lauer, “I love New York. I’ve always been a big fan of it. This is one incident that happened that I can’t take back, and I feel extremely sorry that this happened. It was not a fun situation.”

#animal cruelty
#cat
#cat killer
#cat killing
#joseph petcka
#norman
#Norman the cat
Do you know the scoop? Comment below or Send us a Tip
A new Gothamist is coming! We’ve moved comments over to our beta site. Click here to join the conversation and get a preview of our new website.