Photographs from the Fiores' home via the Daily News 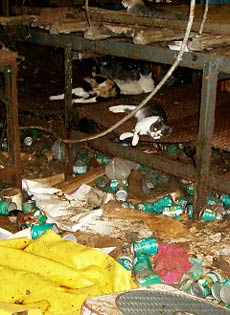 A Brooklyn couple was charged with animal hoarding after near 100 cats—many flea-bitten and dehydrated— were found in their home last summer. The Daily News reports that Michael and Hazel Fiore "face a 252-count indictment for keeping the tortured tabbies in a rented Williamsburg loft that reeked of decomposing cat carcases, feces and urine. The extent of the horror came to light in July, when five kittens, two of them blind, fell through urine-soaked rotting floorboards from the third-floor space to the loft below."

Their downstairs neighbor Rob Deoude told NY1, "First we didn't even realize or think it would be possible that it would be coming from upstairs, but I literally saw one fall through the ceilin. Then we started putting mattresses down because we didn't want cats falling on the bare wood floor 12 feet down." Deoude claimed that he and other neighbors called the ASPCA, Humane Society and city for years to alert them to the issue, but when cats started falling through the ceiling, "We realized that again that we had to make another effort to get somebody over here to do something about this." Another artist in the space said, "Talking to them, they're not bad people. They are just not too aware of some things and the situation got out of control."

The ASPCA went to the loft, which is above the Camel Art Space, yesterday and found many cats living alongside bodies of dead cats. The couple also ran a silk-screening business in the Metropolitan Avenue loft, and a handyman told the News, "The smell was real, real, real bad. It was litter boxes and open cat food cans everywhere. All of Metropolitan Ave. smelled like a litter box."

Many of the cats were euthanized. The Fiores were charged with torturing and injuring animals; Michael Fiore, 61, faces up to two years in jail while Hazel Fiore, 57, faces up to one year.

#brooklyn
#cat hoarder
#cat hoarding
#loft
#williamsburg
Do you know the scoop? Comment below or Send us a Tip