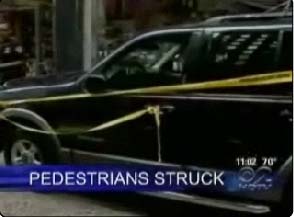 Although no one was actually killed, Friday was a tough day for Manhattan pedestrians. Three separate cars careened onto sidewalks; and so many people were hit that it's unclear how many were run down.

The mayhem began in Chinatown shortly after noon. A driver reportedly was attempting to back into a parking space when he accidentally jumped the curb and six hit people sitting on a park bench and passing by. The victims were hit in front of the Laguardia Houses on Rutgers and Madison Sts. One woman's lower body was crashed by the 4,000 pound vehicle as she sat on the bench that the car struck.

A few hours later, during the commuter rush when pedestrians crowd the sidewalks near Penn Station, an SUV driven by an unlicensed driver drove onto a crowded sidewalk and hit approximately ten people. Somehow, no one was seriously injured. Estabannie Sanchez was the 23-year-old driver in that incident, who doesn't even have a license to drive. Friends reportedly asked Sanchez to pull up to the front of a music store to load some purchases, at which point Sanchez drove the Ford Explorer onto the sidewalk bordering 7th Ave., striking approximately ten people. After running down women and a child, among others, Sanchez ran away from the scene but was later arrested.

And a woman was struck and injured on Harlem's 125th St. by a livery cab driver. The driver hit the gas instead of the brake, jumped the curb and ran over a 55-year-old woman, who was taken to St. Luke's Hospital in critical condition.