Photos via Pardon Me For Asking

Just after 1 a.m. a brownstone at 241 Carroll Street in Brooklyn partially collapsed. The building—one that Brownstoner once described as filled with "grandeur and charm"—was a multiple family home. (It was previously listed on the market at $3,500,000.) All residents of the 4-family home were successfully evacuated and the FDNY confirmed with us this morning that there were no injuries.

Newswire reports that came in overnight suggested that one wall collapsed, with the partial collapse of another wall, and photos at Pardon Me For Asking show the damage. The Buildings Department has already met with other agencies to determine the building will have to be fully demolished. 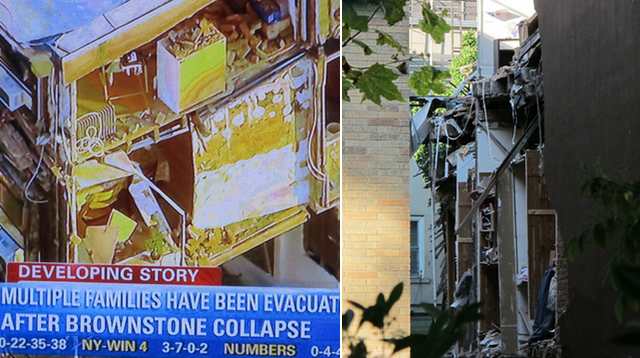 Photos via Pardon Me For Asking

The Red Cross was on the scene last night and as of this morning residents of the building, as well as the neighboring building, have not been allowed to return to the scene, according to the NY Times. Sisi Schneider, who owns the building with her husband (the couple paid just over $1.5 million for it in 2004), told the paper they haven't done any construction, and blames a "lack of lateral support on the alley side" which has possibly been a growing issue since the former neighboring building was torn down in the 1950s in order to build P.S. 58. The DoB will further investigate to determine what happened.