New York City's horse and carriage industry, centered around 59th Street and 5th Avenue, has existed for 155 years. But opponents, including our new mayor Bill de Blasio, view the operation as a form of animal cruelty. "We are going to get rid of the horse carriages. Period," de Blasio said on Monday. "It's over."

Critics of the industry charge that the horses are forced to work long hours, squeeze into squalid living conditions, and navigate a dangerous traffic-congested environment. NYCLASS, the animal rights advocacy group that has been leading the charge against the carriage horses, donated $220,000 to a group dedicated to sinking former City Council Speaker Christine Quinn's mayoral aspirations and another $124,000 on their own anti-Quinn efforts. NYCLASS was responsible for $774,000 worth of ads attacking Quinn, and its board members donated to de Blasio's election fund.

During the campaign, Quinn said she supported the carriage horse industry. Her opponent, Bill de Blasio, promised he would ban it immediately. After his primary victory, some of de Blasio's biggest fundraisers donated tens of thousands of dollars to NYCLASS.

There are about two hundred carriage horse drivers, ranging from newcomers working their way through college to veterans who've been giving rides to tourists for decades. Here's what eight of them have to say about de Blasio's vow to eradicate their livelihood.

A lot of people depend on this business. I've been doing this almost 30 years. Most of us guys have families to support. We've been licensed by the city for this long and for no reason they just going to stop the business? There's no horse abuse. Anyone who knows anything about horses can look at the horses and see they're all in good shape, proper place to live. The horses have pretty much been always around. The horses built this country. Now they're just working a leisure job. It's not even like, hard work. They do a run cause it's 20 minutes, they sit around for an hour, they eat. It's exercise for them. If you take away the horses' jobs, what's going to happen to the horses? There's already thousands of horses going to slaughter in this country every year. 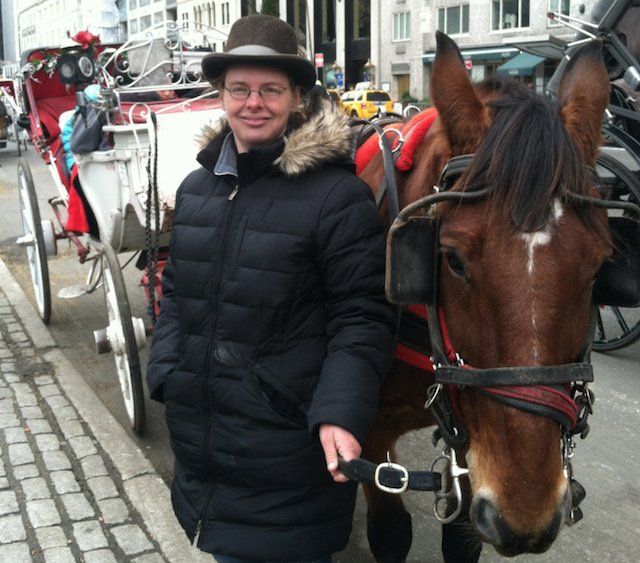 [De Blasio] doesn't know anything about horses. He hasn't had a pet since childhood. So he doesn't even know about dogs. That's a telling sign. That's a sign that he's a radical animal rights person because animal rights people don't think you should own dogs or cats. That animals belong out there someplace and not in the city, not in our apartments, not in our homes, not in our lives. So he doesn't know anything about horses.

When [carriage horse opponents] just started—these people are very politically savvy—it was all about, "We'll get the electric cars, we'll make more money."

Electric cars don't take up as much square feet of real estate as carriage plus two horses and stalls and stables and everything. It would take up less square footage and [Steve Nislick, co-founder an president of NYCLASS] knew exactly how many square feet are stables were. He knew more than we do. That's what they started out with. Now we stood there and some other people—Michael Gross, who writes about real estate—he pointed out that this all seemed to be about real estate.

How convenient. So they kind of changed tack to more of an animal rights thing. They enlisted the help of PETA and some other organizations. Radical animal rights.

Fred Leite, a driver for the last 3 years, working to pay his way through college:

A lot of people who don't really know anything about horses want to put their two cents into it. It's kind of like a homeless person on the corner, you see him, you say "I don't want him there. I don't care what happens to him, but I don't want to see him when I go to work next time."

People walk by, they see the horses, they think it's some type of slavery. But they really
don't know that this is what a horse's life is like. They're strong, they're healthy, they work for a living. They don't do this, they get depressed. 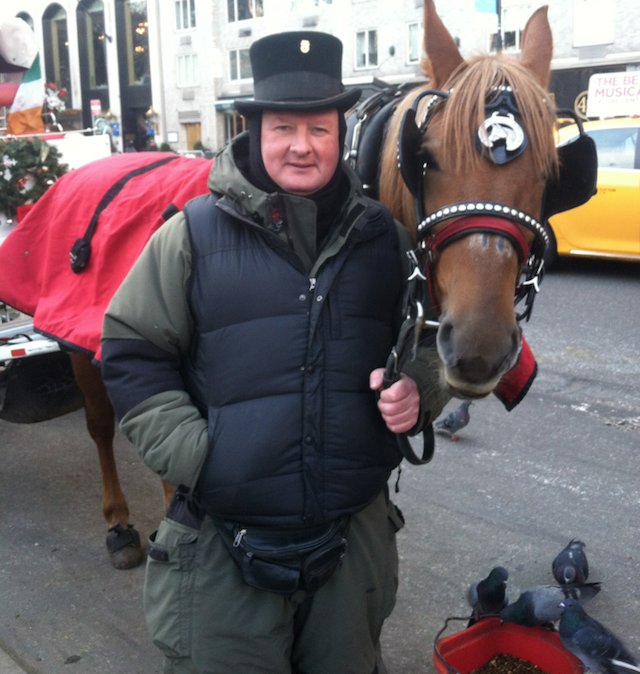 [De Blasio] never came to see our stable. He never did any research from our side. It's strange. You would expect that someone who is the mayor would not just be influenced by some advocate. That he would see both sides or say "I'm hearing what you're saying but let me see what the other side is saying, because I actually am the mayor of New York."

This is the guy we've now elected to make serious decisions that are going to affect all of our lives. That doesn't matter whether you're a horse carriage guy or a taxi guy or live in a building or have a job or whatever. I mean, he's the mayor of New York. That's what I find strange. 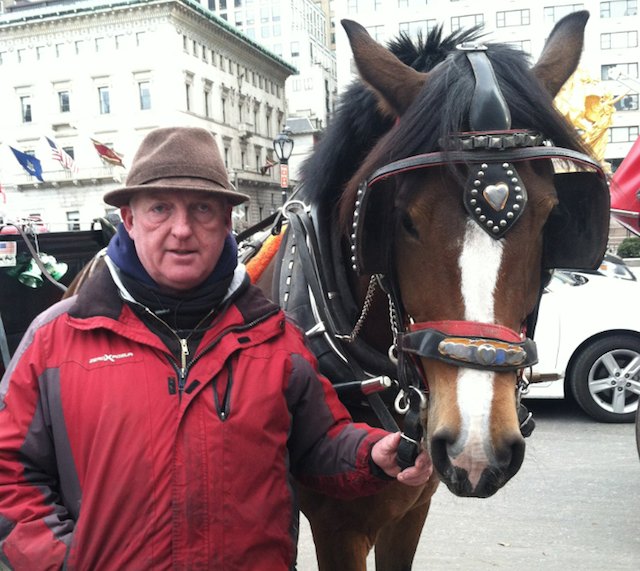 Sean Boyle, driver of Elvis, 22 years in the business:

Of course I'm nervous. Everybody's nervous. People have this idea that we're drivers. I own this horse. I own this carriage. 60 to 70% of this business is owner-operators. It's not a big stable that they own all the carriages. I think people think that. That the four stables own all the carriages. They don't. Accidents cannot be prevented. As you can see with Metro North, you cannot prevent accidents. Accidents are part of life. 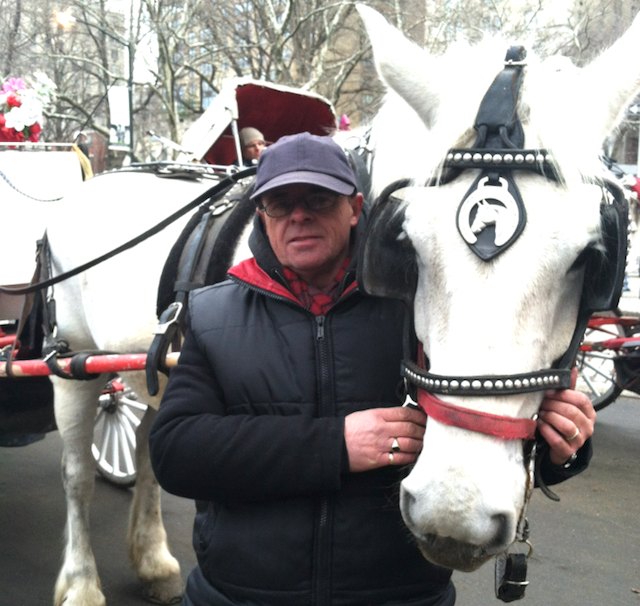 Tommy Hughes, driver of Oscar, 33 years in the business:

It's all politics. It's got nothing to do with the horses. These horses are vetted. They got more rules and regulations now than they ever had. They get like five weeks vacation. Most horses actually get more time than that. If you send a horse up, you don't leave him for five weeks. You leave him for two or three months. Everybody has two horses for their carriage. When this horse goes to Pennsylvania, he's there for four months.

When [de Blasio] was on the city council, there was a bill that came forward about the horse and carriages industry. He didn't vote against it. So now all of a sudden he's against it. That says there's more to it. 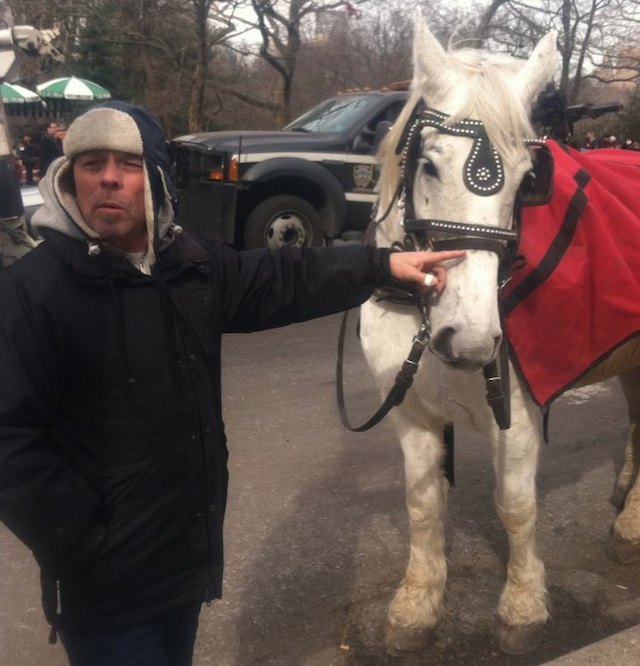 Dave Koch, driver of Mabel, 30 years in the business:

A mammal has been bred to pull for 8,000 years starting with denuding the forests of Europe when civilization first began so they've been bred to do nothing but pull. A ridden animal horse is more contemporary—3,000 as opposed to 8,000—so these animals have been pulling stuff for many thousands of years. This is very easy on them. An animal that does this for most of its life will work well into its twenties, even. I've worked horses out here that were 32, 33, 34.

Then they get retired. There isn't anything that's ultimately deleterious to the animal by pulling, bearing tires on a smooth surface. There is no argument to be made that that's going to harm the horse whatsoever. You've got a group of people who are being fed nonsense. The guy who's funding all this is a real estate guy.

His name is [Steve Nislick, co-founder an president of NYCLASS]. He's interested in buying the land. The stables are located right by the Javits Center and they want to put hotels up in there. 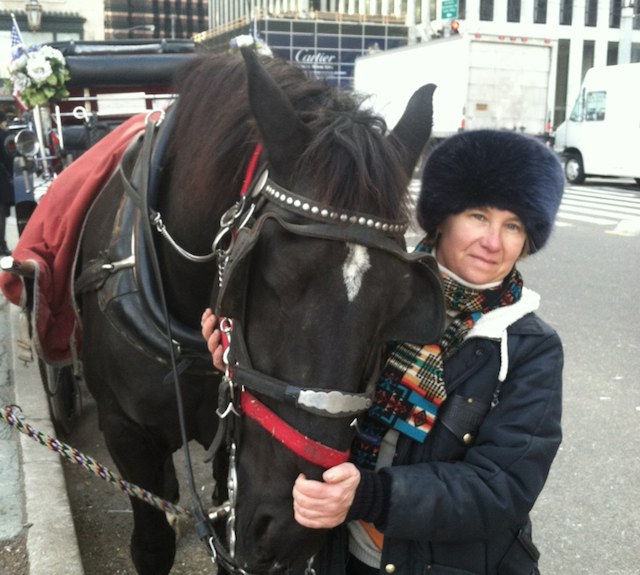 Natalia Kabanova, driver of Blackie, 3 years in the business:

Central Park was created for carriage rides. There used to be horseback riding program. If [de Blasio] bans it, everybody might regret it, because a lot of people like it. Because the majority of people, they enjoy it. Kids...It's just nice to have horses. Something besides concrete, besides cars and trucks. It's nice to have something different.

An orthographical doppelganger of the star of several Wes Anderson films, Jason Schwartzman is a writer who lives and works in New York City. His work has appeared in The Classical, Daily Intel, and the St. Louis Beacon.