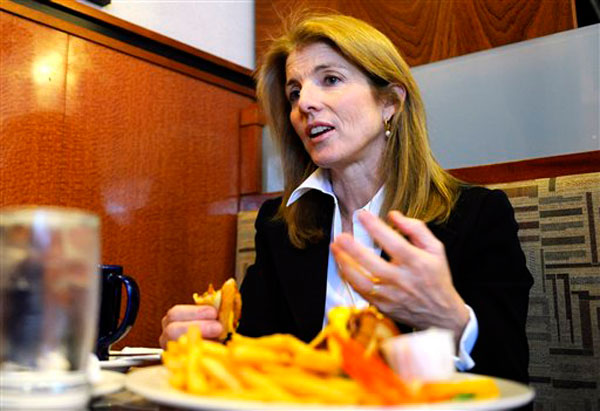 Caroline Kennedy, whose Senate aspirations have only allowed for controlled moments with the press and submitting written answers to media outlets' questions so far, has finally submitting to actual interviews. First, an interview with the Associated Press was published, just after she spoke to reporter Larry Neumeister at Tribeca diner Gee Whiz (she ordered a grilled cheese and bacon sandwich).

Kennedy, 51, mentioned that her father's legacy influenced her, "Many people remember that spirit that President Kennedy summoned forth. Many people look to me as somebody who embodies that sense of possibility. I'm not saying that I am anything like him, I'm just saying there's a spirit that I think I've grown up with that is something that means a tremendous amount to me."

She also acknowledged the past few weeks have been rocky but explained why she wasn't so media-friendly because, "I was trying to respect the process. It is not a campaign. It was misinterpreted. If I were to be selected, I understand public servants have to be accessible." Like financial disclosure accessible? Kennedy added, "I am an unconventional choice," then referred, perhaps to her friend Barack Obama, the President-elect, "We're starting to see there are many ways into public life and public service." She would "work twice as hard as anybody else" to prove herself. 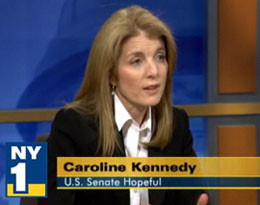 Later, her interview with NY1's Dominic Carter aired (you can see it here), and she reiterated many of the same points, "I haven’t followed a traditional path, but I think I bring a lifetime of experience to this. In my family public service is really the greatest honor anyone can have it’s a legacy I cherish and that I’ve tried to live up to my whole life.”

When asked about running on the Kennedy name, "If my last name weren’t Kennedy, maybe I would have run for office a long time ago.” Kennedy mentioned her brother, John F. Kennedy Jr., saying, "he would be laughing his head off" over her Senate hopes, but he would be 100% behind her. As for her mother, "I think she would be really proud that I’m doing this.” She also struck a wistful tone:

Everybody has tough moments. I've lost family members that I love and that I miss everyday and so has many, many other people has dealt with an ill parent the loss of a family member and stuff and that's a part of life I think I share those experiences with everybody else and if there's ways I can help other people who are suffering some of the same things I have gone through I would love to do that.

She also brought up Jennifer Lopez, to whom she was unfavorably compared with by Rep. Gary Ackerman, “I admire the journey J. Lo has traveled" but "I don’t think there is really much we have in common.” And of her spotty voting record, "I was dismayed by my voting record.”

And on Hillary Clinton, Kennedy said, "We are losing a tremendous advocate for New York, even though our country is gaining a great Secretary of State when Hillary Clinton ascends to the state department. I think we need somebody who is going to be able to be heard and deliver for this state and I would love to be that person."