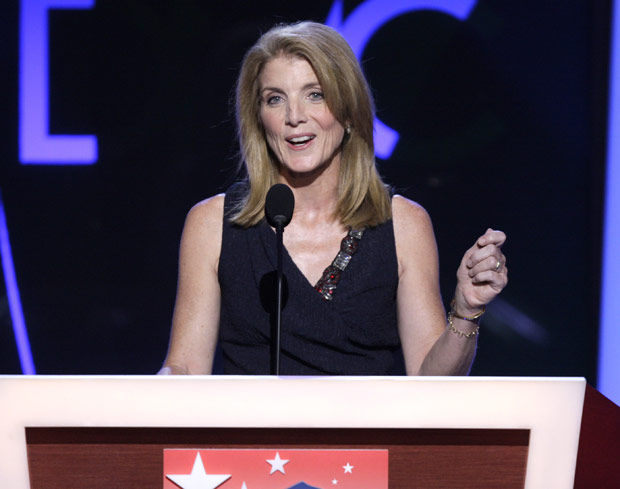 Governor David Paterson confirmed that Caroline Kennedy called him to discuss Hillary Clinton's soon-to-be vacated Senate seat. He said, "She told me she was interested in the position... She’d like at some point to sit down and tell me what she thinks her qualifications are.” While Paterson has said he will not decide on an appointee until next year, one Democratic source tells the Daily News, "She is in. I don't see how he [Paterson] says no. He has to do it."

The NY Times offers this reasoning from a person "who had advised Mr. Paterson" (pointing out that Paterson will have to run for Governor in 2010, as will Kennedy, if appointed, for Senate): "The upside of her candidacy is that the 2010 ballot will read Kennedy - Paterson. David craves national attention and money. If you connect the dots, it leads to her.” Another person in Paterson's circles tells the Times:

Ms. Kennedy and Mr. Paterson had spoken several times in recent days and that the governor had grown increasingly fond of her...The person, who spoke on condition of anonymity to avoid antagonizing the governor, said that Mr. Paterson also had come to see Ms. Kennedy as a strong potential candidate whose appointment would keep a woman in the seat and whose personal connections would allow her to raise the roughly $70 million required to hold on to the seat in the coming years.

The Times also notes that Kennedy has become excited about the prospect of being Senator. Still, there are doubters. Rep. Anthony Weiner said last night, "We don't know if Caroline has that fire in the belly. Being senator of New York is a 2-4/7, 365-day-a-year endeavor." Which might be why Kennedy hired Josh Isay, who Politico calls a "major Democratic fixer...who has deep connections to New York powerhouses Sen. Charles Schumer, Mayor MIchael Bloomberg and the Rev. Al Sharpton."

Sharpton is ready to show his support: He told Politico that he told Kennedy about a "lady that wanted to run for U.S. Senate [who] came to Harlem, to the House of Justice, and they told me she wasn’t qualified; they told me she was just there because of who she was married to — and that was Hillary Clinton," while he defended Kennedy's supposed lack of experience to the News, "Elected office is not the only area of public service that establishes leadership in this country."

The Post's editorial wholeheartedly supports Kennedy for Senate, noting her access to President-elect Obama plus, "Kennedy's selection would be a welcome sign of Paterson's willingness to reject the politics of pander and special-interest pressures merely to satisfy some ethnic or geographic quota." The Daily News, however, wants the chance to size up her abilities. As for Republicans, well, let's say that the prospect of a Kennedy taking the Senate seat is enticing: Rep. Peter King (R-Long Island) said, "If anything, it makes me more determined to run [in 2010]. As far as record of achievement, I strongly believe that I'm much more qualified, much more experienced, and have an independent record. Nothing against Caroline Kennedy, but I don't think anyone has a right to a seat."