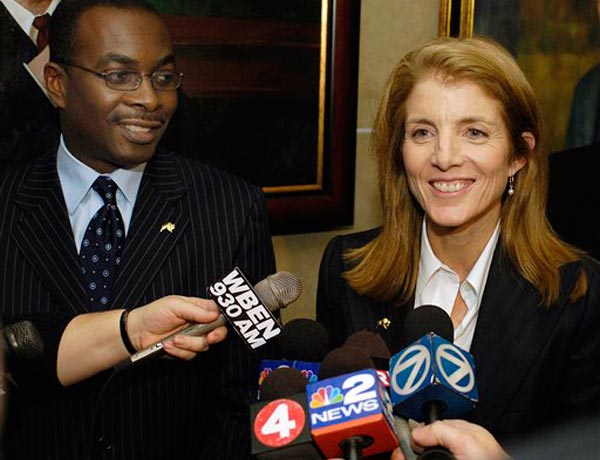 Caroline Kennedy, currently angling for Hillary Clinton's soon-to-be vacated Senate seat, has answered questions from Politico, the New York Times and the Buffalo News about her political views. Kennedy expressed her support for gay marriage, the Roe Vs. Wade ruling ("which prohibits third-trimester abortions except when the life or health of the mother is at risk") and allowing undocumented workers to legalize their status in the U.S. She also voiced opposition to the Iraq War (and support of President-elect Obama's plans to withdraw from the region) and noted that Nafta "had unintended, negative consequences in some regions of New York."

Some highlights are after the jump, but the Times notes that her "answers described views similar to those of other New York Democrats, including New York’s senior senator, Charles E. Schumer, and Mrs. Clinton," though her apparently support of gay marriage is different from Clinton and Obama. The Buffalo News found her stance on immigration vague (she mentioned the "need to do more to control our northern border"). And Politico writes, "her answers also demonstrated her precarious political position as a Democrat who's also a protégé of Mayor Michael Bloomberg, who left the Democratic Party to chart a smoother path to City Hall and for years generously funded the local Republican Party in exchange for their ballot line."

The NY Times also has an article about how some young voters might not know who she is. A twenty-something Borders clerk said, "I’m like, ‘Is she a Kennedy Kennedy, or is this one of the cousins?’ She’s the one with the brother who died in the plane?” At any rate, Rep. Peter King (R-Long Island) believes he'd be able to beat her in 2010, should Governor Paterson choose her for Clinton's Senate Seat. The Daily News reports that King is probably smart to avoid trying to run against Schumer—Rep. Anthony Weiner (D-Queens & Brooklyn) says, "Pete King is not suicidal. It would be a fool's errand to run against Chuck," while Baruch College's Douglas Muzzio says, "Chuck Schumer is a heavyweight, he's a champ."

She also supports mayoral control of the NYC public school and closing down Indian Point.

#caroline kennedy
#Clinton replacement
#governor paterson
#hillary clinton
#Kennedy dynasty
#senate
Do you know the scoop? Comment below or Send us a Tip