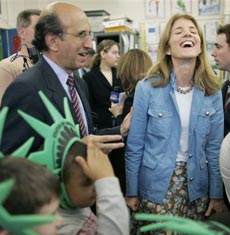 Sure, Caroline Kennedy may have answered (well, in a written format) some questions about her positions, but that hasn't stopped the naysayers from naying.

Rep. Gary Ackerman (D-Queens) previously said of Kennedy that she "has name recognition, but so does J.Lo. I wouldn't make J.Lo the senator unless she proved she had great qualifications, but we haven't seen them yet." This time, on CBS's Face the Nation (video below), he said Kennedy's handlers "basically Sarah Palin-ized her" by keeping her away from the press last week.

Rep. Peter King (R-Long Island) was also on Face the Nation. King has expressed interest in running for the Senate seat in 2010 and said, "How can the average New Yorker identify with Caroline Kennedy? ... She's never even held one news conference. She hasn't gone to one American Legion hall or Knights of Columbus hall or Masonic temple, or one synagogue to answer questions. When she does go on her so-called listening tour upstate, she's, like, running from city hall into the car to avoid reporters."

Defending Kennedy was Joel Klein, NYC Schools Chancellor and her good friend (pictured, with Kennedy in 2004). Klein spoke to the power of her work ethic and the Kennedy name, "Five and a half, six years ago, when I asked her, along with Mayor Bloomberg, to come help with New York City's public schools, that's not a glamorous thing to do. This woman put her shoulder to the wheel, went out there and sent a powerful message to the entire city that public education matters. She helped us raise money. She helped us forge partnerships. And she spent time with our kids in the schools."

Another Senate-hopeful, Rep. Caroline Maloney (D-Manhattan), defended Ackerman's comments, saying he wasn't sexist, "Gary Ackerman has been a strong supporter of women's rights,"—and the Daily Politics suggests she made a few digs at Kennedy. Today, the Washington Post's Chris Cilizza offers the case for Caroline Kennedy—one thought is, "The idea of replacing one high-profile woman with a national (and international) reputation with another high-profile woman with national (and international) reputation makes good sense -- politically for Paterson and more generally for voters." And he'll follow up tomorrow with the case against Kennedy.

And another person against Kennedy in the Senate: The mayor of Paris.

#caroline kennedy
#Clinton replacement
#governor paterson
#hillary clinton
#peter king
#senate
Do you know the scoop? Comment below or Send us a Tip