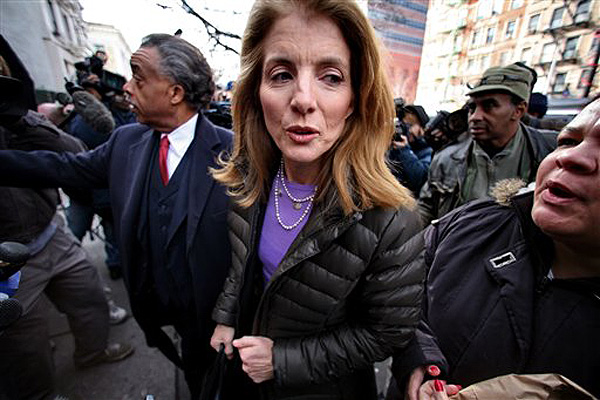 Photograph of Caroline Kennedy and the Rev. Al Sharpton amid the media frenzy by Bebeto Matthews/AP

Caroline Kennedy had lunch at Sylvia's with the Reverend Al Sharpton today and told reporters, "I feel like I'm a Kennedy Democrat, a Clinton Democrat, [Sen. Charles] Schumer, Barack Obama -- these are all leaders whose values I share and I feel like those are the kinds of values that I would bring."

However, Republican Rep. Peter King has been vocal questioning her abilities; he said to CNN, "I'm not aware of anything she has ever said about the Islamic terrorist war against us, what we have to do to defend ourselves, what we should do on foreign policy. I'm not saying you have to be a politician or to have held office ... but you have to be somewhere in the public arena. The fact is that she has a well-known name, her face has been on a lot of magazines but, really, very limited involvement in the public sphere."

Yesterday, Kennedy headed upstate to meet politicians in Syracuse, Buffalo and Rochester (and it was apparently very tightly controlled) and said, "I just hope everybody understands that it is not a campaign but that I have a lifelong devotion to public service. I’ve written books on the Constitution and the importance of individual participation. And I’ve raised my family. I think I really could help bring change to Washington.” She even joked, "I'll be back as many times as Chuck Schumer."

An interesting subplot is how trusted adviser to Mayor Bloomberg, Kevin Sheekey, has been pushing hard for Kennedy. The NY Times quotes someone who says "Sheekey's up to his eyeballs in this." While Bloomberg said Sheekey's private time is up to him, the mayor told The View, "If it were my call to pick somebody, I'd know exactly. I can't tell you, because I'd be getting involved. I should stay out of this race, it's up to Governor Paterson, he's lucky to have a number of different candidates. I was asked about Caroline Kennedy, she's very competent, she's done a lot for New York City."