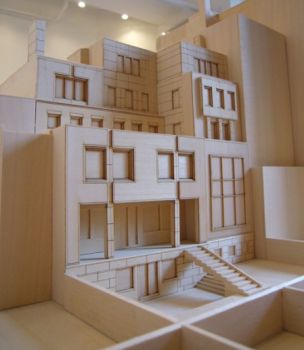 Wall Street tycoon Dr. Mitchell Blutt is at the center of a Manhattan mansion controversy: He purchased two town houses east of his home on East 90th Street between Park and Madison in hopes of combining them into one giant abode.

The NY Times reports that "three Romanesque Revival, four-story town houses," upon merging into one, would create a 17,000-square-foot mansion. The triple Brownstone residential combo is a rare one, and needless to say it's raising eyebrows around town--especially with Carnegie Hill residents.

While preservationists worry about the landmark- protected buildings, neighbors are nay-saying Blutt's vision, calling it a “McMansion;” one recently sent Curbed some images of the proposal. The original plans include "a three-story rear-yard addition" (15 ½ feet higher than the original rear walls) and adding "20 feet to the height of the buildings by adding a fifth floor, as well as a concrete bulkhead for a new elevator shaft." (When his architect presented the blueprints last week, he was told to submit redrawn plans by the Landmarks Preservation Commission.)

The Historic Districts Council's Simeon Bankoff called the plan: “an audacious proposal. It’s the kind of thing that seems to be extraordinarily conspicuous consumption.” Blutt, who just spent $20 million pre-renovations to build an unprecedented residence that could house half the Lower East Side, "declined to comment, saying he did not want to bring attention to himself."

Last year a state appeals court ruled that a family could evict tenants from their building in order to renovate it into a five bedroom home, complete with library, gym, and nanny's suite.