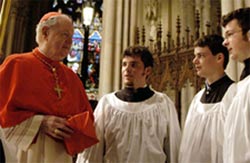 Edward Cardinal Egan, the archbishop of the New York Archdiocese, had no patience of protesters or reporters covering the protests outside a Midtown church yesterday. Some people have been upset their local churches have been closed by the Catholic Church, most notably parishioners Our Lady Queen of Angels in East Harlem, who have been protesting the February closing every weekend since February. And yesterday, outside of St. John the Baptist on West 31st Street, Our Lady Queen of Angels parishioners-turned-protesters gathered to ask Egan, "Why have you abandoned us?"

The Daily News reported this exchange between Egan and the media:

"You just have to ignore all this and grow up," Egan said when asked about the Catholics gathered outside in protest of the closure of their beloved church, Our Lady Queen of Angels.

When pressed, Egan, who had just finished celebrating Mass at St. John the Baptist on W. 31st St., said, "Oh, for heaven's sake."

Egan left the church through a back door, avoiding the 30 protesters.

Before stepping into a waiting van, Egan again refused to discuss the protest.

"Madam, get serious," he said. "This is important. Go in and look at reality."

The New York Archdiocese closing of churches has been driven by immigration and other demographic changes. The News points out that there are three churches within walking distance of Our Lady Queen of Angels, but many parishioners feel very strongly about their church, even holding a funeral for a fellow parishioner outside the closed church. And in one of the other parish closings, a Lithuanian Church downtown was shut in a sneaky fashion: The priest was called to a meeting with Cardinal Egan, and while he was gone, the church was locked!

Earlier this year, New York magazine examined Egan's career and how other priests can't wait to get rid of him (he's expected to retire soon).