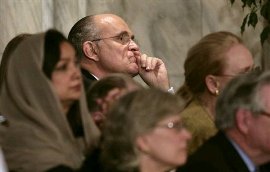 Apparently Egan and Giuliani had an "understanding" from back when Egan became Archbishop and Giuliani was mayor, where Giuliani "was not to receive the Eucharist because of his well-known support of abortion." Egan's statement ended with, "I deeply regret that Mr. Giuliani received the Eucharist during the Papal visit here in New York, and I will be seeking a meeting with him to insist that he abide by our understanding.” Good luck with that! Giuliani's been known to ignore the advice of longtime advisers.

The Daily News points out other high-profile politicians who support abortion received Communion: "So did House Speaker Nancy Pelosi and Senators John Kerry, Christopher Dodd and Edward Kennedy at Nationals Park in Washington."

#abortion
#Catholic Church
#communion
#pope benedict
#rudy giuliani
Do you know the scoop? Comment below or Send us a Tip