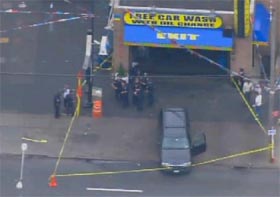 A Queens car wash was the scene of a fatal incident that left one employee dead. Two workers who had been drying a vehicle were hit by another worker who drove into them with an SUV.

According to the Daily News, the worker "came roaring out of the cleaning tunnel at a killer speed" in a silver Jeep Cherokee. He hit Olston Kilkenny's car and pinned Felipe Alvarenga. Then the worker "kept driving - turning onto Sunrise Highway in the silver Jeep Cherokee." Alvarenga died at Franklin Hospital, while another worker who was hit is in stable condition.

The Jeep was found abandoned a few blocks away, and the police are still looking for the worker. Kilkenny said, "I think he panicked. I don't think he was trying to hurt those guys."

#car wash
#out of control car
#pedestrian struck
#queens
#suv
Do you know the scoop? Comment below or Send us a Tip
A new Gothamist is coming! We’ve moved comments over to our beta site. Click here to join the conversation and get a preview of our new website.